Suspected arson in Japan anime studio leaves up to 13 dead 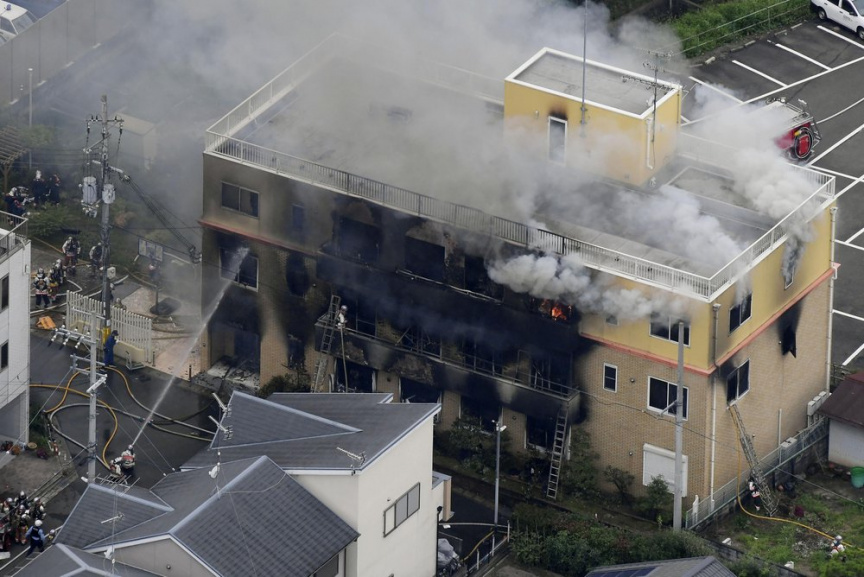 Smoke billows from a three-story building of Kyoto Animation in a fire in Kyoto, western Japan, Thursday, July 18, 2019. (Kyodo News via AP)

TOKYO (AP) — A man burst into an animation production studio in Kyoto and set it on fire early Thursday, killing one person, leaving 12 others presumed dead and a dozen possibly trapped inside.

The blaze injured another 36 people, some of them critically, Japanese authorities said.

The fire broke out in the three-story Kyoto Animation building in Japan’s ancient capital of Kyoto, after the suspect spread an unidentified liquid to accelerate the blaze, Kyoto prefectural police and fire department officials said.

As many as 18 others could be still trapped on the third floor, he said.

The suspect was also injured and taken to a hospital, officials said. Police are investigating the man on suspicion of arson.

Witnesses in the neighborhood said they heard bangs coming from the building, others said they saw people coming out of the building blackened, bleeding, walking barefoot, Kyodo News reported.

Rescue officials set up an orange tent outside the studio building to provide first aid and sort out the injured.

Fire department officials say more than 70 people were in the building at the time of the fire. Many of them ran outside, but about 30 people still could not be reached.

Firefighters were searching for victims after the fire was extinguished hours later.

Kyoto Animation, better known as KyoAni, was founded in 1981 as an animation and comic book production studio, and is known for mega-hit stories featuring high school girls, including “Lucky Star,” ″K-On!” and “Haruhi Suzumiya.”