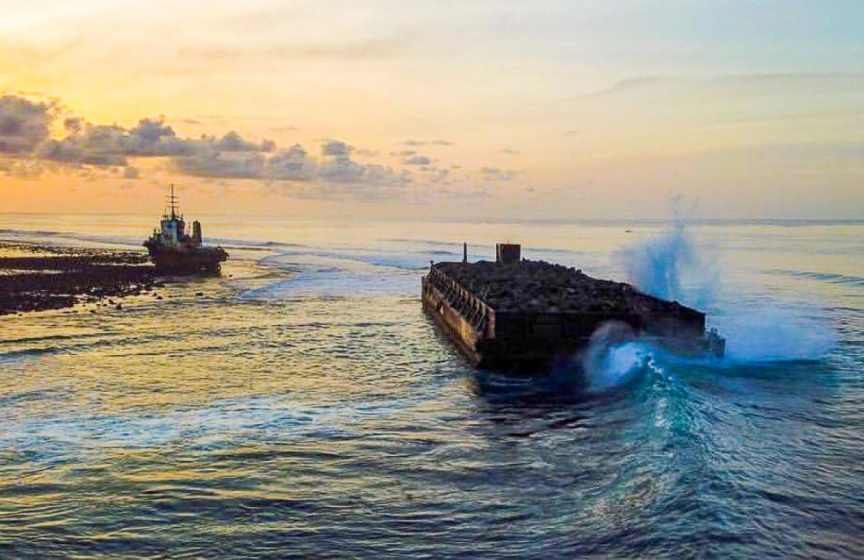 A barge and tugboat lays wrecked on the reef off Th. Funaddu.

It has been two years since a barge loaded with concrete blocks and the tugboat maneuvering the barge wrecked on the reef off Th. Funaddu.

Funaddu is leased to a private party to run a fish factory. And the area to the South West of Fonaddoo is considered a surfer’s paradise.

The barge was carrying large concrete blocks for Maldives Transport and Contracting Company (MTCC)'s ariport development project in Th. Thimarafushi when it wrecked on the reef off Funaddu in 2017.

Neither the barge nor the tugboat has been moved off the reef, resulting in massive environmental damages and preventing surfers from using the highly prized surfing spot.

Th. Atoll Council has expressed concern over the issue.

The fact that the barge and tugboat hasn’t been removed off the reef and towed away is a major concern to the council. President of Th. Atoll Council, Rilwan Abdulla reports the members of the council met with officials from the Environment Ministry to express their concern over the continued environmental damage.

He said he has no idea whether any progress has been made on remedying the situation.

He also said the council had previously assumed the barge and tugboat belonged to MTCC.

MTCC’s CEO, Hassan Shah reports the vessels do not belong to MTCC. He said the barge is owned by the company to which MTCC subcontracted the task of carrying the construction material to Thimarafushi.

Shah was searching through the records to identify the company when ‘Sun’ called for a comment.

When asked about the delay in removal of the vessels off the reef, Director of Environmental Protection Agency (EPA), Ibrahim Naeem said it was because no one had taken ownership of the vessels, and the ownership itself is under dispute.

According to EPA, the vessels were originally owned by an Indonesian company, but later resold to another company when the vessels wrecked on the reef.

The EPA has approached the Attorney General’s Office for legal counsel regarding the issue.

Multiple concerned parties have taken to social media platforms to express their concern over the issue, especially given the potential to develop clean tourism at the location.

Th. Kanimendhoo, which neighbors Fonaddu is also a popular surfing spot, and is frequented by safaris on a daily basis.

Tourism Minister Ali Waheed previously announced the administration plans on developing clean tourism in Maldives as part of its efforts to expand the tourism industry.