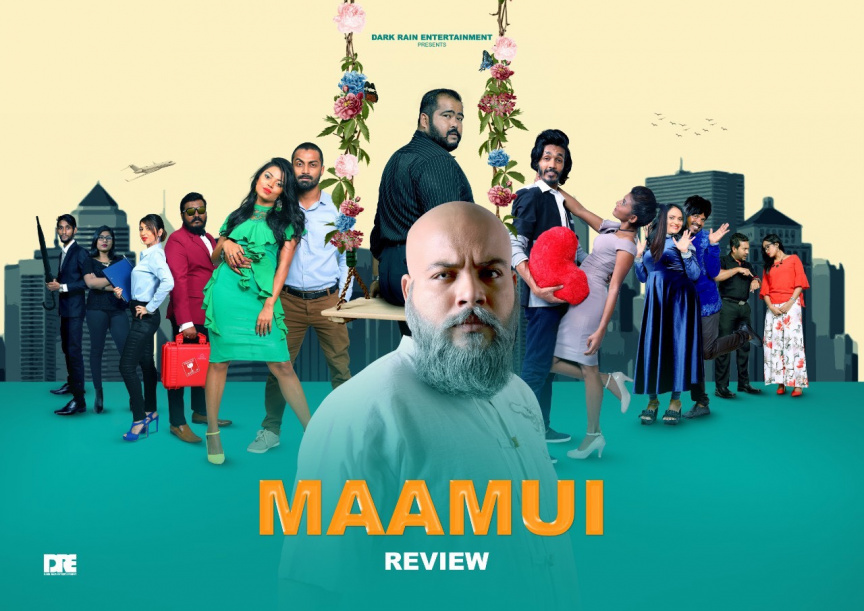 The hype has been buzzing and building up for nearly 3 months on end, along with fervent anticipation ever since the release of the trailer. And thus, on the night of July 1st Dark Rain Entertainment (DRE) unleashed its 13th feature film Maamui to the masses. The term ‘unleashed’ must be taken liberally based on the film’s impact on unsuspecting audience members who will find their collective funny-bones not just tickled but shredded across a cheese-grater right from the opening scene to the very end.

Maamui sees DRE take a sharp U-turn from its prior release, the grim yet brilliantly gritty Goh Raalhu, into more familiar territory that is humour. The film firmly checks all the right boxes be it satire, wit, hilarity, absurdity, shock-delight or just plain tomfoolery. With a stellar cast and diabolical plot to boost, Maamui packs a powerful punch that reverberates into guffaws of laughter.

Right from the onset the film depicts and explores the dynamics between its characters who are all linked either coincidentally or fatefully. It is the deeply flawed (and somewhat twisted) nature of the characters that make them so endearing in the first place.  The convincing and seemingly effortless performances of the actors involved makes one wonder if they were acting out a semblance of their real personalities.

What is Maamui? Seems to be the proverbial question. Let’s just say the storyline contains (among other things); a covert police investigation, criminal masterminds with their goons and of course, relationships (which, in hindsight, are what the film is really all about). We witness married couple Salman (Jumayyil) and Haifa (Azza) starved for some privacy with Salman caught in the crossfire between his wife and mother, Vargeena (Sheila). Then there is the lengthy courtship of Rushdy (Jumah) and Thaniya (Maju) sorely lacking a desired proposal. Next up is the blossoming and exciting romance of Happu (Fubu) and Dhiyana (Nuzu), spectacularly captured in a nostalgic song-and-dance number. On this score, the charming onscreen chemistry between Fubu and Nuzu needs to be mentioned. Saniya (Yaadha) and Bunny’s (Ayya) marriage on-the-rocks is well balanced by the former’s morbid suspicions and the latter’s penchant for adultery. Yaadha shines as a seasoned actress in her first acting role.

Other noteworthy performances include; the perpetually fresh-looking tyrant Hudhu Mukhthar (Shaakko) and the dodgy yet likeable tycoon Pradheep Rauf (Rex) with his eternal look of ‘Why are the-forces-of-fate out to get me? Hamdhan positively glows as the flamboyant Rosie and Ms. Romani (Maria) is a credible henchwoman. The investigators Zara (Samahath) and Arsalan (Amaan) together with the undercover Switch (Channa) are all quite persuasive. Reethi Issey (Suni) through his fortunes and misfortunes is equally impressive.

Maamui is refreshingly fast-paced and innovative in its storytelling. Themes of love, power, sex, infidelity, doubt and even outright hate, flow freely in an ingenious screenplay. The climax brings it all home in a resounding spectacle that is nothing short of pure comedy gold. Designed to bring down the house continuously from start to end, Maamui truly delivers on this merit.

DRE’s team; Moger, Chippe’, Aishath Fuwad(Loki), Ahmed Tholal and Shinan can take a proud bow for their toil in making and presenting this classic gem and for always pushing the boundaries of the local film Industry.