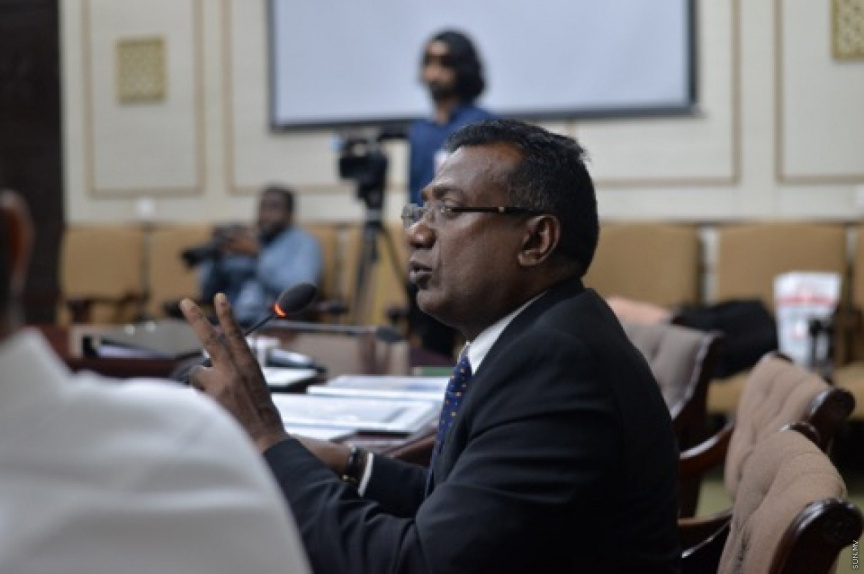 Kaashidhoo MP Abdulla Jabir gestures as he speaks at a meeting of the State Enterprises Committee of the Parliament. (Photo/Sun/Fayaz Moosa)

Kaashidhoo MP Abdulla Jabir has resigned from the State Enterprises Committee of the Parliament after expressing his dissatisfaction over the committee’s work.

Jabir expressed his dissatisfaction over the committee’s work at the parliamentary meeting this Wednesday morning and was removed from the chambers by Speaker Mohamed Nasheed for disruptive behavior in a first for the current parliamentary assembly.

Speaking to ‘Sun’, Jabir said he made the decision to resign from the committee over the inadequacy of its work.

“They are doing inadequate work by summoning the 31 State enterprises. I can’t condone this. They are playing a drama at the committee,” said Jabir.

The parliamentarian also exchanged heated words with the Chairperson of the State Enterprises Committee, Hulhudhoo MP Ilyas Labeeb this Wednesday. He left the committee meeting room after announcing his resignation.

Jabir, who served as advisor to President Ibrahim Mohamed Solih and current Parliament Speaker, former President Mohamed Nasheed, was elected to the Parliament as an independent candidate.