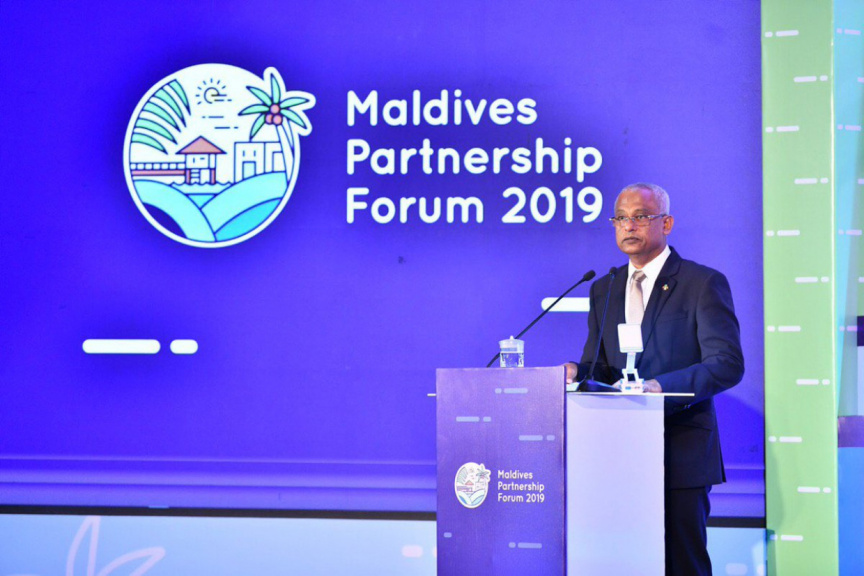 President Ibrahim Mohamed Solih sates that the government will not scarifies the natural resources of the Maldives for a short-term development, but will develop the country in harmony with resources available.

Speaking at the inauguration ceremony of the Maldives Partnership Forum held in Kurumba Maldives this Monday, President Solih stated that the government came to power with the promise of a ‘Jazeera Raajje’. He said that Maldives being an island nation plays a huge role on the development of the country.

“This development must occur in harmony with our resources to ensure the very existence of the Maldives, and allow us to continue to enjoy our prosperous livelihoods which are so dependent on these factors,” stated President Solih.

Speaking more in the ceremony, President Solih stated that the Maldives population consists mostly of youth that are eager to embrace innovative, technological and urban development. He added that the country cannot afford a temporary development by sacrificing its natural resources. He stated that the government’s policies and manifesto are based upon this

“But in the age of the Anthropocene, the world and the Maldives are learning that we cannot sacrifice our natural foundations for short term developmental gains,” said the President.

The President also expressed in his speech that despite the developments achieved by the Maldives within a short period of time, the development has not reached all the Maldivians and the country has yet to reach its full development.

He stated that Maldives depends its development on its natural resources and environment, but remain vulnerable to these factors.

President Solih highlighted that waste management, reducing the dependency on imported fossil fuel, providing more job opportunities for the youth and the overall development of the country are the highest priorities of the government.

“For decades, people in the outer islands have had to travel to Male’ to meet their basic needs, including for health and education, contributing to an urban crisis in the capital. Those from islands outside of the greater Male’ region, should also have the beneficiaries of the same level of development as Male’. The Government’s decentralization policy is intended to rectify this,” stated the President in his speech.

He also added that the issues faced by Male’ City cannot be solved without developing the rest of the country. He stated that the local communities are the best judges of how their own atolls and islands should be developed. He said that the government is already working with the local councils and implementing policies which would increase their financial independence.

Expressing the need for support and corporation from foreign partnerships, he stated that the government has already started the development projects with some of the countries.

The forum inaugurated at Kurumba Maldives is a two-day long forum that will end on June 17. It is forum held to discuss the development plans of the Maldives with its international partners. More than 60 delegations take part in this forum.