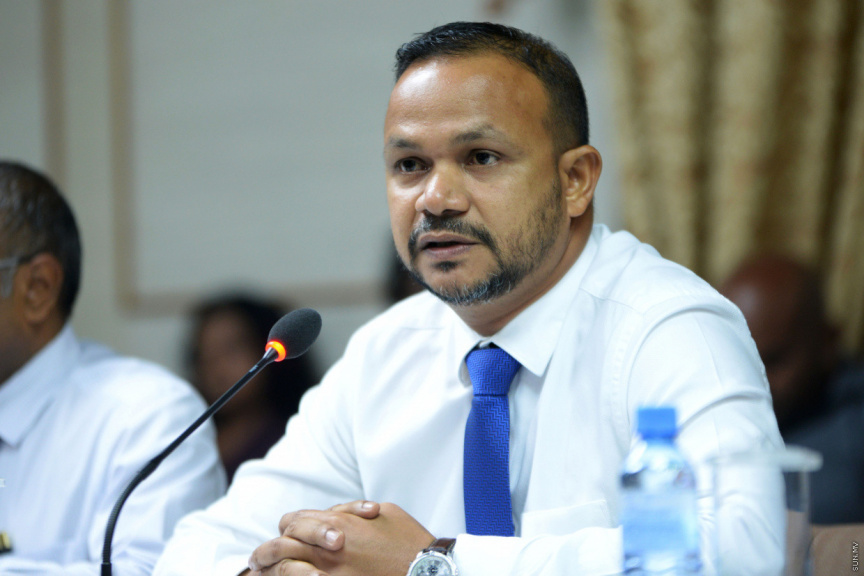 Kendhoo MP Ali Hussain speaks during a meeting of the Judicial Committee of the Parliament. (Photo/Sun/Ahmed Awshan Ilyas)

The Parliament has no jurisdiction to determine whether the Judicial Service Commission (JSC)’s decision regarding the suspension of Supreme Court Justice Abdulla Didi is legal, says Kendhoo MP Ali Hussain.

The Judicial Committee of the Parliament, last Sunday night, passed a motion to take a general vote at the Parliament to determine JSC’s decision to suspend Didi as legitimate.

Ali Hussain did not vote in favor of the motion, which was put forward by West Henveyru MP Hassan Latheef.

Ali Hussain spoke in length regarding the issue at Sunday night’s committee meeting.

He said that the Parliament does not have the jurisdiction to rule a decision by JSC as valid or invalid.

“Under what task of this Parliament can we make this determination? If we make such a determination, then, for example, the ACC may make a decision and send it to the Parliament to determine its validity,” said Ali Hussain.

He stressed that the three branches of the State needs to be separate, and that the Parliament, if it rules on the validity of a decision as a court of law, will be interfering with the work of independent institutions.

Meanwhile, Hussain Latheef said that he believed in parliamentary supremacy. He said that the last say lay with the people, and that it is the Parliament which will deliver the last say on behalf of the people.

Hussain Latheef said he believed in the right of the Parliament to debate and make decisions based on something an independent commission may do.

Countering the argument, Ali Hussain said that the Parliament has two main responsibilities; lawmaking and holding the government and institutions accountable.

He said that the Parliament has the right to notify Judicial Service Commission or any other independent institution on what it may be doing wrong.

“What I am saying is the Parliament does not have the power to determine the legality of a decision by Judicial Service Commission,” said Ali Hussain.

The Judiciary Committee passed the motion to call for a vote to determine the legality of JSC’s decision during its meeting. It’s expected that the Parliament take its vote this Monday.

Didi was placed under suspension following a probe into a USD 1 million bribery allegation against him filed by Speaker of Parliament, President Mohamed Nasheed.

Following JSC’s decision to suspend him on June 12, Didi filed a motion with the Supreme Court citing violation of due process by JSC in making the decision. The Supreme Court issued a stay order, asking JSC and other State agencies to refrain from executing the suspension until the court issues a decision regarding the case.

JSC held an emergency meeting following Supreme Court’s stay order and decided it will not accept the stay order.

Didi continues reporting to work while the JSC and Supreme Court remain deadlocked over the issue.