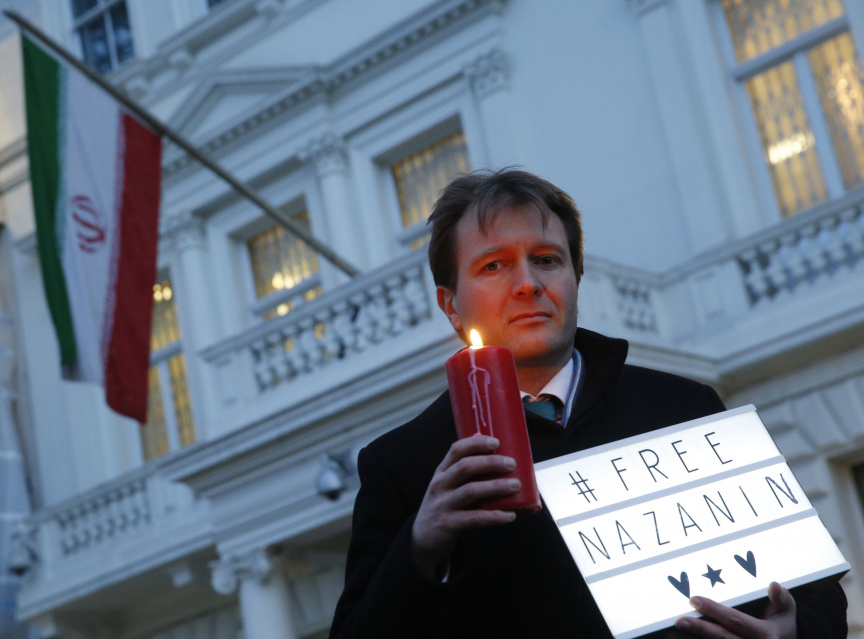 In this Jan. 16, 2017 file photo, Richard Ratcliffe, husband of imprisoned charity worker Nazanin Zaghari-Ratcliffe, poses for the media during a vigil outside the Iranian Embassy in London. (AP Photo/Alastair Grant, File)

LONDON (AP) — A British-Iranian woman jailed in Tehran for more than three years has begun a hunger strike to protest her detention, her husband said Saturday.

Nazanin Zaghari-Ratcliffe has told judicial officials she will refuse food but will drink water until she is granted "unconditional release," her husband, Richard Ratcliffe, said.

Ratcliffe said he would hold a vigil outside Iran's London embassy, and would fast in support of his wife.

Ratcliffe said his wife "had vowed that if we passed (daughter) Gabriella's fifth birthday with her still inside, then she would do something — to mark to both governments that enough is enough. This really has gone on too long."

Zaghari-Ratcliffe, who worked for the charity arm of news agency Thomson Reuters, was detained at Tehran airport in April 2016 on charges of plotting against the Iranian government. Her family denies the allegations.

The hunger strike comes amid heightened tensions between the West and Iran, which the U.S. and U.K. blame for attacks on two oil tankers in the Gulf of Oman this week. Iran denies involvement.