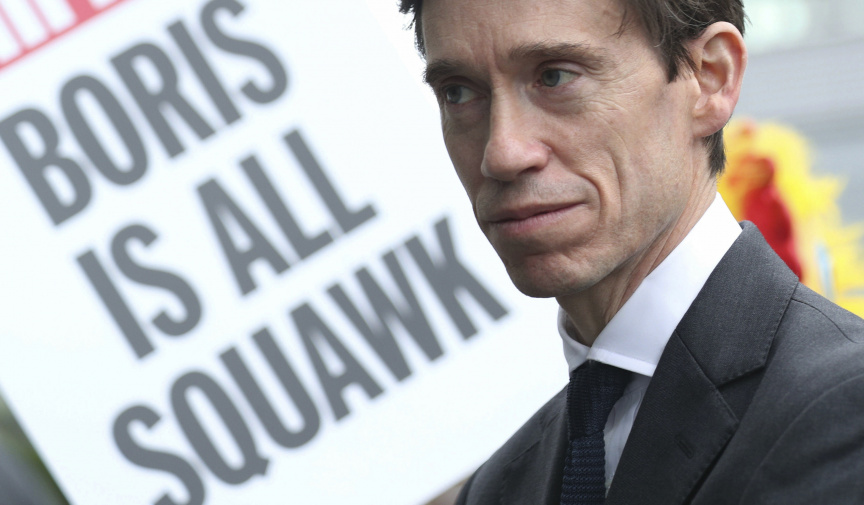 LONDON (AP) — Candidates seeking to beat Boris Johnson and become Britain's next prime minister accused the Brexit-backing front runner of trying to avoid scrutiny after he refused to take part in a televised debate alongside his five rivals Sunday.

"Where is Boris?" Foreign Secretary Jeremy Hunt asked as he and four other contenders for Conservative Party leader faced questions about how exactly they would fulfill a key promise: to unblock the stalled Brexit process and lead Britain out of the European Union.

Broadcaster Channel 4 left an empty lectern on the debate stage for Johnson as the participating candidates argued they had a quality that many think the absent Tory politician lacks: trustworthiness.

"I believe I'm the candidate most trusted to get us out (of the EU) by the end of October," Dominic Raab, a former Brexit Secretary, argued.

Hunt said the Conservatives must choose "a prime minister that families up and down the country trust with their future."

Johnson, a former London mayor and foreign secretary, has a commanding lead after last week's first round of voting by Tory lawmakers in the contest to replace Theresa May. She stepped down as party leader earlier this month after failing to secure Parliament's backing for her European Union divorce deal.

An instantly recognizable figure, famous for his Latin quips and unruly blond hair, Johnson is admired by many Conservatives for his ability to energize voters. But others mistrust him for his long record of misleading and false statements, verbal blunders and erratic performance in high office.

The 313 Tory lawmakers in the House of Commons are set to narrow the field of candidates in a series of votes this week, with the final two names put to a postal vote of about 160,000 Conservative members nationwide.

The winner, who will become party leader and prime minister, is due to be announced in late July. But some in the party say the membership vote could be skipped if Johnson is so far ahead that he looks unlikely to be beaten.

Others argue that would be a big mistake. May became prime minister in 2016 without a party vote, after all her rivals dropped out of the race. Critics say a more robust contest would have exposed her flaws as a leader before she got the top job.

Home Secretary Sajid Javid, who is also running, said that "as Conservatives, we should embrace competition over coronation."

The leadership contest has been dominated Brexit, with all the candidates promising to succeed where May failed and lead Britain out of the EU. The U.K. was originally due to leave the bloc on March 29, but Brexit has been delayed to Oct. 31 because of the political deadlock in London.

Johnson has won support from many Brexit-backing Conservatives by vowing to "get Brexit done," either by renegotiating May's rejected Brexit deal or by leaving the EU on Oct. 31 without an agreement.

But Johnson has avoided answering tough questions about his plans. The EU says it will not reopen the Brexit divorce agreement, and many economists and businesses say a no-deal exit would cause economic turmoil by ripping up the rules that govern trade between Britain and the EU.

During Sunday's debate, the other candidates all said they would take Britain out of the European Union. But they split over how willing they would be to walk away from the EU without a deal if they could not get a new divorce agreement.

Environment Secretary Michael Gove said he was confident that "I can get the European Union to change their approach" and renegotiate the divorce deal.

But Raab insisted it would be better than further delay and did not rule out suspending Parliament to force through an exit if lawmakers tried to block it.

The others condemned that idea. Stewart said it was "deeply disturbing," while Javid likened it to the action of a dictator.

Johnson's critics say his political record is tainted by blunders and outright lies. During the country's 2016 EU membership referendum, he campaigned on the inaccurate claim that Britain sends 350 million pounds ($444 million) a week to the EU.

In 2017, when he was foreign secretary, he said incorrectly that a British-Iranian woman imprisoned in Iran was a journalist, damaging attempts to secure her release.

Last week Johnson apologized for any offense his words had caused, but also claimed they had often been taken out of context.

Johnson has agreed to participate in a BBC debate on Tuesday, once the field of candidates has been reduced by a second round of voting earlier in the day.

Boris Johnson builds lead in race to be UK PM