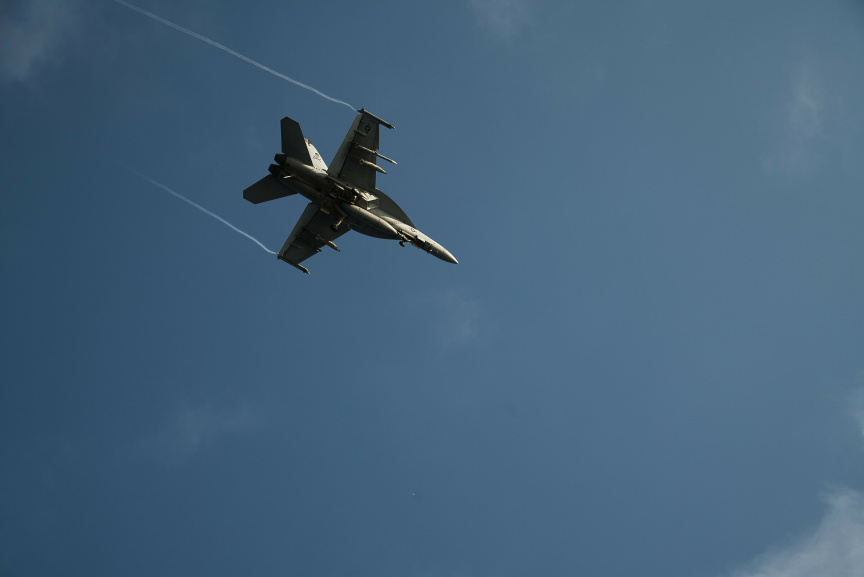 An F/A-18 fighter jet flies over the deck of the USS Abraham Lincoln aircraft carrier in the Arabian Sea, Monday, June 3, 2019. The U.S. aircraft carrier the White House ordered to the Mideast over a perceived threat from Iran remains outside of the Persian Gulf amid efforts to de-escalate tensions between Tehran and Washington. (AP Photo/Jon Gambrell)

DUBAI, United Arab Emirates (AP) — Saudi Arabia said it evacuated an Iranian crew member from a "hostile" ship off the coast of Yemen amid its war against the Iranian-backed Houthi rebels, the second-such aid it has offered in recent weeks amid heightened tensions between the U.S. and Iran.

The Saudi military flew rescue paramedics to the Saviz, an Iranian vessel some 95 nautical miles northwest of Yemen's contested port city of Hodeida, spokesman Col. Turki al-Maliki said. They then flew the injured Iranian to a military hospital in Jizan, Maliki said.

Iran's mission to the United Nations had made a request to aid the Iranian, Maliki said. The mission did not immediately respond to a request for comment Wednesday.

"The leadership of the joint forces has dealt with the situation according to what is dictated by our Islamic religion and human values, despite the threat represented by this suspect vessel, and the hostile acts it carries out against coalition forces and the interests of the Yemeni people and its continued threats to maritime routes and global trade in the Red Sea," Maliki said in a statement Tuesday.

The statement did not elaborate. Saudi Arabia and Iran are chief Mideast rivals and the Saudis since 2017 have alleged the Saviz served as a maritime base and weapons transshipment point for Iran's paramilitary Revolutionary Guard. Briefing materials from the Saudi military earlier obtained by The Associated Press showed men on the vessel dressed in camouflaged military-style fatigues, as well as small boats capable of ferrying cargo to the Yemeni coast.

Video broadcast of the ship last year by the Saudi-owned satellite news channel Al-Arabiya showed what appeared to be a covered machine gun bolted to the ship's deck.

A July 2018 analysis from the Washington Institute for Near East Policy called the Saviz an "Iranian mothership" in the region. It described the ship as a cargo vessel docked at the time off the Dahlak archipelago, a chain of islands off the coast of the nearby African nation of Eritrea in the Red Sea.

"The Iranian military is likely using the Saviz to provide targeting data for Houthi antishipping attacks" in the Red Sea, the institute alleged, without elaborating. The institute's analysts routinely have access to Gulf and Israeli military sources.

This is the second time within recent weeks the Saudi government has aided Iran based off a request from its U.N. mission. In May, an Iranian oil tanker carrying more than 1 million barrels of fuel oil suffered a malfunction in the Red Sea off the coast of Saudi Arabia. The kingdom helped the Happiness I reached anchorage off Jiddah, where it still remains.

Meanwhile, the White House in May deployed the Lincoln and B-52 bombers to the Persian Gulf over perceived threats from Iran. The U.S. also plans to send 900 additional troops to the Mideast and extend the stay of another 600 as tens of thousands of others also are on the ground across the region.

The Mideast crisis takes root in President Donald Trump's withdrawal last year of the U.S. from the 2015 nuclear deal between Tehran and world powers that capped Iran's uranium enrichment activities in return for lifting sanctions. Washington subsequently re-imposed sanctions on Iran, sending its economy into freefall.

Iran now has said it will begin stepping away from the deal. Amid the escalation, the U.S. alleged without offering evidence that four oil tankers off the coast of the United Arab Emirates were attacked with limpet mines by Iran. Meanwhile, Yemen's Iranian-backed Houthi rebels have launched coordinated drone attacks on Saudi Arabia.

The Saudi-led war in Yemen, which began in March 2015, is currently the world's worst humanitarian crisis. The fighting in the Arab world's poorest country has killed an estimated 60,000 people and left millions suffering from lack of food and medical care.