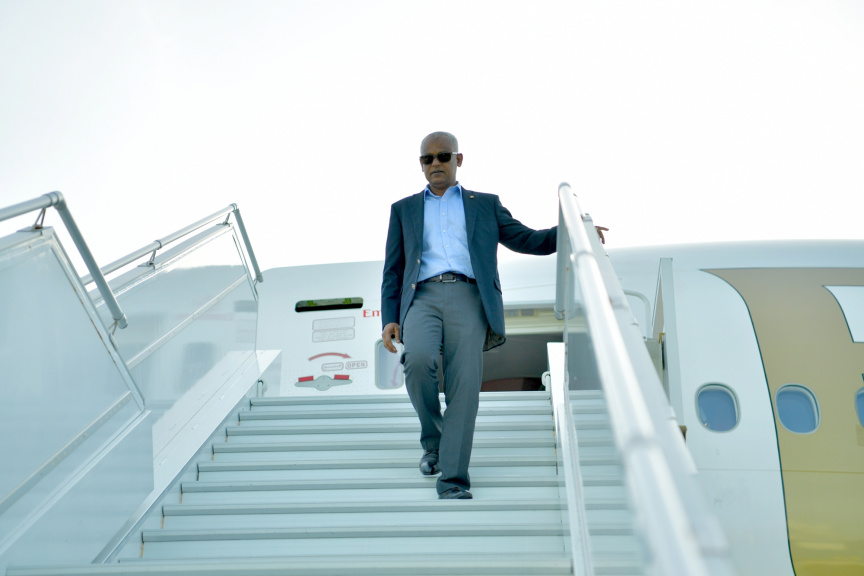 President Ibrahim Mohamed Solih arrives back in Maldives upon conclusion of the 14th high-level summit of the Organization of Islamic Cooperation (OIC) in Mecca, Saudi Arabia, on June 3, 2019. (Photo/President's Office)

President Ibrahim Mohamed Solih is back in Maldives upon conclusion of the 14th high-level summit of the Organization of Islamic Cooperation (OIC).

President Solih, who left for Mecca, Saudi Arabia, to attend the OIC summit on May 29 returned to Maldives this Monday morning.

The 14th high-level summit of OIC began in Mecca on May 31. Topics discussed at the summit included the growing prevalence of Islamophobia, regional security in the Middle East, the growing threat posed by extremists, as well as other issues facing the Islamic Ummah.

In his statement at the summit, President Solih highlighted that Maldives was consistent in its advocacy on behalf of Muslims everywhere, referring to its continued support for the Palestinian cause and frequent condemnation of anti-Islamic bigotry, as demonstrable examples.

He also emphasized that tasks confronting the Islamic Ummah were immense, and need for collaboration between Muslim countries to successfully meet the challenges.

As the Islamic Ummah get ready to mark the end of the holy month of Ramadan and the beginning of Fitr al-Eid, President Solih urged all Muslim leaders to set aside their differences to join hands to pray for the future peace, success, and wellbeing of the Islamic Ummah.