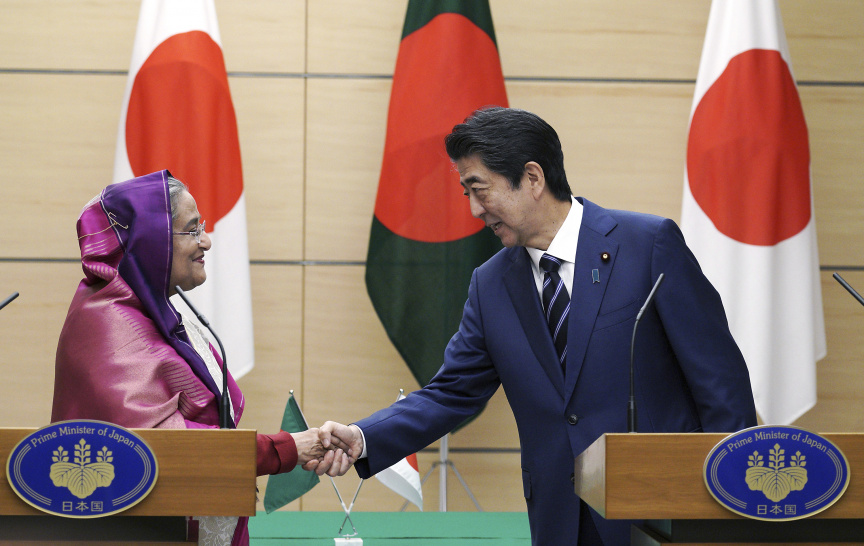 TOKYO (AP) — Japan announced 132.6 billion yen ($1.2 billion) in aid to Bangladesh on Wednesday for economic development, a high-speed railway and other projects.

The assistance, announced during a visit by Prime Minister Sheikh Hasina, also will go to Japanese companies doing business in Bangladesh and will support efforts to boost energy efficiency throughout Bangladesh, the Foreign Ministry said in a statement.

Hasina, who is beginning a third consecutive five-year term, expressed thanks to Prime Minister Shinzo Abe following a signing ceremony at his official residence in Tokyo.

She told reporters she welcomed Abe's promise that "Japan will stand by Bangladesh," as her nation seeks to join the developed world by 2041.

Abe said the leaders had "a meaningful exchange" on various issues, including Hasina's continued support for Japan's opposition to North Korea's nuclear weapons program. Bangladesh and Japan also reiterated their agreement to work together against terrorism, Abe added.

Abe held a dinner Wednesday in honor of Hasina, who arrived Tuesday and leaves Friday.

Japan has been wary of what it sees as security and economic threats from neighboring China and has been courting other nations in Asia as well as the U.S. and Europe.

This week alone, Abe is meeting with leaders of the Philippines, Cambodia, Malaysia, Vietnam, Singapore and Laos in addition to Bangladesh. He just finished hosting a four-day visit by U.S. President Donald Trump, which ended Tuesday.

Hasina has visited five times before, as prime minister and opposition leader.

Promoting trade between Japan and Bangladesh is important for both sides, with Bangladesh importing mostly steel, autos and machinery from Japan, and Japan importing clothing products and jute.

Japanese imports from Bangladesh have quadrupled compared to 2009 levels. Japanese companies setting up shop in Bangladesh are also growing, mostly in textiles and manufacturing.

Japan has welcomed Bangladesh's support for its wish to become a permanent member of the U.N. Security Council, as well as for its position on nuclear weapons.

Hasina won an overwhelming victory in December elections. The opposition alliance is demanding new elections, saying the polls were rigged, an allegation the Election Commission and Hasina have rejected.

Modi sworn in for second term as Indian prime minister