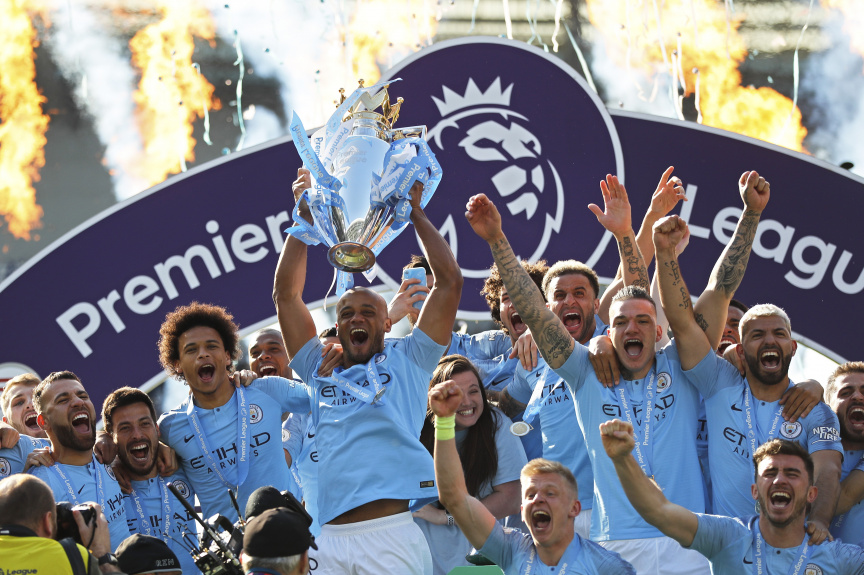 BRIGHTON, England (AP) — Earning 97 points is almost always enough to win the Premier League. Not for Liverpool, which had the misfortune of running up against a Manchester City team setting new standards of excellence.

Only for 21 minutes during Sunday's season finale was the title in Liverpool's hands.

But by completing the season with a 14th successive victory — coming from behind to overwhelm Brighton 4-1 — City finished a point ahead of Liverpool and retained the trophy.

An English title drought that has clocked up 29 years rolls on for Liverpool. It's no consolation that Juergen Klopp's side combined with City to amass 195 points for the highest Premier League tally for the top two.

The only comfort for Liverpool is that it didn't sign off the season on Sunday with a 2-0 victory over Wolverhampton. While City has an FA Cup final to come to try to complete a domestic treble, Liverpool can win a sixth continental title if it beats Tottenham in the June 1 Champions League final.

The one major trophy missing in the City trophy cabinet is the European Cup. It's the target for the Abu Dhabi ownership and manager Pep Guardiola who has shown he can conquer the Premier League.

Captain Vincent Kompany has been part of City's four title triumphs since 2012, having previously won under Roberto Mancini and Manuel Pellegrini before the Guardiola double.

"It was the hardest and most satisfying Premier League title win ever," Kompany said. "Liverpool was exceptional, I don't mean to rub it in, it is what it is, they didn't deserve to lose."

Ten minutes after Liverpool went in front against Brighton through the first of Sadio Mane's two goals, City fell behind at Brighton.

Although Sergio Aguero leveled 83 seconds after Glenn Murray's header, it took Aymeric Laporte's header in the 38th minute to put City back in control of its title destiny.

That goal turned out to be the title-clincher, with City's anxieties only eased in the second half by record-signing Riyad Mahrez netting and Ilkay Gündogan scoring from a free kick.

It was on the south-coast exactly 21 months ago where Guardiola's first title-winning campaign began.

By the time the blue-and-white streamers had rained down on the City players on Sunday night, 201 goals had been scored and 198 points collected across the two title-winning campaigns.

Long forgotten is the spell four months ago when Liverpool blew the chance to go 10 points clear of City.

Instead the title hinged on Liverpool's only defeat of the campaign in January to City, which could afford to lose four times and still emerge victorious.

"As long as City are around," Klopp said, "with the quality they have, the power, the financial power and that stuff, then it's not any other team will pass them easily, that is clear. So we need to be very, very close to perfection to win the Premier League as long as this is the case."

Tottenham qualified for a fourth successive season in the Champions League after an unlikely series of results failed to materialize, leaving north London rival Arsenal finishing a point behind in fifth.

Christian Eriksen's free kick clinched Tottenham's 2-2 draw with Everton and Arsenal beat Burnley 3-1. Arsenal could still make the Champions League if it beats Chelsea in the Europa League final on May 29.

Chelsea was already sure of its return to the Champions League going into the final day and sealed third place — 25 points behind Liverpool — with a 0-0 draw at Leicester.

Manchester United slumped to its first league loss to Cardiff since 1960 in front of many empty seats as fans left Old Trafford before the final whistle.

The 2-0 collapse ensured United finished in sixth place — just where the record 20-time English champions were when Ole Gunnar Solskjaer replaced the fired Jose Mourinho in January. A bright start to Solskjaer's interim reign saw him rewarded with a three-year contract in March, but United has endured a miserable run since then.

There was a three-way split for the Golden Boot as Liverpool duo Mane and Mohamed Salah finished level on 22 goals with Arsenal forward Pierre-Emerick Aubameyang. Both Mane and Aubameyang netted twice on Sunday.

With doubts over his future, Rafael Benitez will hold talks with Newcastle owner Mike Ashley after completing the season with a 4-0 victory over relegated Fulham.

Crystal Palace's club doctor has said he and his family were racially abused by a young child near Selhurst Park ahead of the team's 5-3 home victory over Bournemouth.