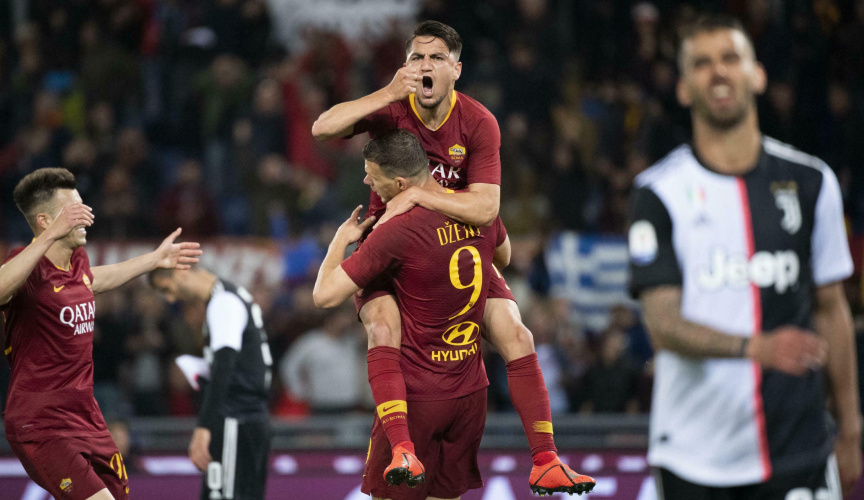 Roma's Edin Dzeko, center, jubilates with his teammates Romas Cengiz Under, right, and Romas Stephan El Shaarawy after scoring the 2-0 goal during Serie A soccer match as Roma - FC Juventus at Olimpico Stadium in Rome, Sunday, May 12, 2019. (Claudio Peri/ANSA via AP)

MILAN (AP) — Roma kept its bid to qualify for the Champions League very much alive with a 2-0 win over Italian champion Juventus in Serie A on Sunday.

Edin Dzeko set up Alessandro Florenzi for the opener 11 minutes from time and scored himself in stoppage time to seal the result.

Cristiano Ronaldo had a Juventus goal ruled out for offside while both teams also hit the woodwork in an entertaining match in which Roma goalkeeper Antonio Mirante pulled off several impressive saves.

"A great Mirante kept us in the match in the first half but I'm happy with the match," Roma interim coach Claudio Ranieri said. "We have to continue to believe. Even if not everything depends on us, we have to get to the end with a clear conscience."

Roma moved back into sixth spot, a point behind fourth-place Inter Milan, which hosts already relegated Chievo Verona on Monday, and three points behind third-place Atalanta.

The top four from Serie A qualify for next season's Champions League.

AC Milan is above Roma thanks to a better head-to-head record, which is the tiebreaker in Italy.

Udinese and Empoli both got what could prove to be crucial wins in their fight to avoid relegation.

Empoli won 2-1 at Sampdoria for its first away victory of the season, while Udinese beat already relegated Frosinone 3-1.

Empoli remained in the relegation zone but is one point below Genoa and two points below Udinese and Bologna, which hosts Parma on Monday.

Diego Farias and Giovanni Di Lorenzo scored for Empoli before Fabio Quagliarella converted a stoppage-time penalty for his 26th league goal of the season.

The 36-year-old Quagliarella has four more goals than Atalanta forward Duvan Zapata in the race for the top goalscorer award and five more than Ronaldo and AC Milan's Krzysztof Piatek.

Torino missed a penalty but fought back to beat Sassuolo 3-2. Sassuolo played more than an hour of the match with 10 men after Mehdi Bourabia was shown a second yellow card for celebrating his goal by half removing his shirt and was sent off.

Andrea Belotti scored twice for Torino, including a stunning overhead kick to win the match, eight minutes from time.

Griezmann tells Atletico Madrid he is leaving the club