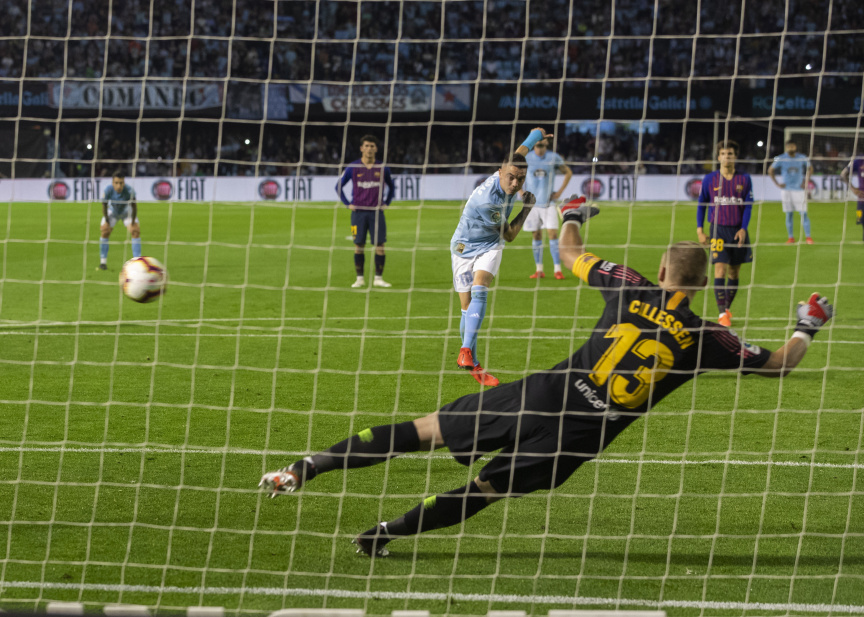 With most regular starters rested, Barcelona's 23-match unbeaten run ended in a 2-0 loss at Celta Vigo on Saturday in the Spanish league.

It was Barcelona's first setback since January and a loss at Sevilla in the Copa del Rey, and its first defeat in the league since November.

The result meant little to the Catalan club, though, as it's fully focused on Liverpool in the second leg of their Champions League semifinal next week, when it will travel to England defending a 3-0 win from the Camp Nou.

Of more immediate concern was a leg injury to Ousmane Dembele, who had to be replaced five minutes into the match.

"Apparently he has a muscle problem," Barcelona coach Ernesto Valverde said. "We will have to wait until the tests tomorrow to see how serious it is."

Celta loved the result, which moved it to 14th place and five points clear of the relegation zone.

A draw would have been enough for Atletico but it struggled from at mid-table Espanyol.

Atletico can still clinch a runner-up finish on Sunday if third-placed Real Madrid loses or draws against Villarreal.

Real Madrid is nine points behind Atletico with three games left, but it holds the head-to-head tiebreaker between the city rivals.

"We still need a point, but it's still up to us to earn this point and finish second," Atletico coach Diego Simeone said. "We have to appreciate the value of a second-place finish in this league."

Atletico is seeking consecutive top-two finishes in the Spanish league for the first time since 1973-74. That was also the last time Real Madrid finished out of the top two in consecutive years.

Espanyol, unbeaten in seven matches, moved to ninth with the victory, staying in contention for a Europa League spot.

The hosts opened the scoring with an own-goal by Atletico defender Diego Godin just before halftime, then striker Borja Iglesias sealed the victory with goals in the 52nd and 89th minutes.

Simeone's team hadn't conceded three goals in a match since March, in a 3-0 loss at Juventus in the Champions League.

"We played a good first half but we weren't ourselves after conceding the own-goal," Atletico midfielder Jorge "Koke" Resurreccion said. "That was not the Atletico we are used to seeing."

Rayo, which was coming off a win over Real Madrid, stayed second-to-last, with little hope of escaping demotion.

Cardiff relegated from EPL after 1 season