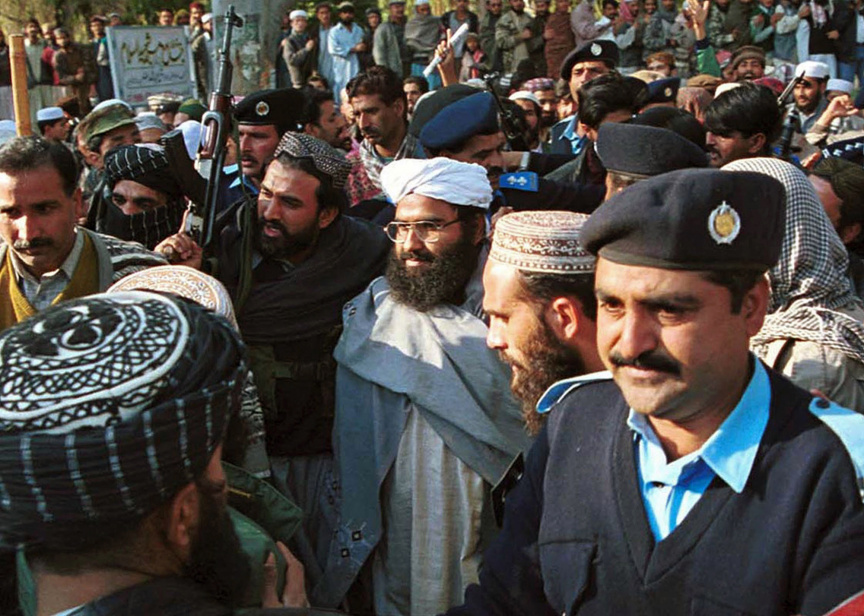 ISLAMABAD (AP) — In a major diplomatic win for India, the United Nations added the leader of an outlawed Pakistani militant group to its sanctions blacklist Wednesday after the group claimed responsibility for a February suicide attack in disputed Kashmir that killed 40 Indian soldiers.

Sanctions against Masood Azhar were confirmed by Pakistani Foreign Ministry spokesman Mohammad Faisal at an urgently held news conference in Islamabad. Azhar's addition to the Security Council's Islamic State and al-Qaida blacklist includes a travel ban and freeze on his assets as well as an arms embargo.

The development came less than three months after Azhar's Jaish-e-Mohammad group claimed responsibility for the Feb. 14 attack in Kashmir, which is split between the two countries and is claimed by both in its entirety. The clashes brought the two nuclear rivals to the brink of war.

India had intensified its lobbying to have Azhar blacklisted after the killing of its soldiers and New Delhi quickly welcomed the Security Council decision. Sanctions against Azhar had been delayed because Security Council member China had blocked them on three previous occasions. But the council went ahead after China no longer objected.

Azhar was blacklisted for his leadership of the al-Qaida-linked Jaish-i-Mohammad. The official listing by the U.N. sanctions committee said the 50-year-old Azhar was associated with al-Qaida by supporting its activities including by supplying arms and recruiting members, and for financially supporting Jaish-i-Mohammed after he was released from prison in India in 1999 in exchange for 155 passengers on an Indian Airlines flight hijacked to Kandahar, Afghanistan.

As a group, Jaish-i-Mohammed had been put on the sanctions blacklist in 2001 for its ties to "Al-Qaida, Osama bin Laden, and the Taliban." The U.N. listing noted that 2008 recruitment posters for Jaish-i-Mohammed "contained a call from Azhar for volunteers to join the fight in Afghanistan against Western forces."

Indian Prime Minister Narendra Modi said on Twitter that "today is a day that would make every Indian proud! I thank the global community and all those who believe in humanitarian values for their support."

Days after the Feb. 14 Kashmir attack, India responded by launching an airstrike in northwest Pakistan that caused no casualties. Pakistan then responded on Feb. 27 by shooting down two Indian warplanes and capturing a pilot, who was later returned.

Timely intervention by the international community defused tensions between the two South Asian nuclear powers, who have fought three wars since gaining independence in 1947.

Garrett Marquis, a spokesman for the U.S. National Security Council, said the Trump administration commends the decision to sanction Azhar. Azhar's sanctioning comes weeks after Washington said it was seeking to have him put on the U.N. blacklist. Pakistan is a key ally of the U.S. in its fight against extremism.

A senior U.S. administration official told reporters that "after 10 years China has done the right thing by lifting its hold on this designation."

The official, who insisted on speaking anonymously, said Britain and France joined the U.S. in putting pressure on China after the Feb. 14 attack, and Beijing seems to have understood "that it is increasingly important that its actions on the international stage on terrorism matched its rhetoric."

The official said the Trump administration is watching to see if Pakistan Prime Minister Imran Khan's commitment to crack down on militants in the country "will translate into irreversible steps to end terrorist and militant safe havens inside Pakistan."

Khan has ordered the takeover of assets and property of Jaish-i-Mohammed and dozens of banned militant organizations that operate in Pakistan.

Bushra Aziz, a spokesman for Pakistan's Embassy to the U.S. in Washington, said the country is resolved to countering terrorism and claims that no other country can match Pakistan's efforts in the fight. Aziz said terrorism is a menace to the world and also criticized India's actions against residents of Kashmir.

Pakistan has said authorities have detained dozens of people suspected of involvement in the Kashmir attack after receiving a file with intelligence on the attack from New Delhi.

Pakistan said its probe did not establish any direct link between Azhar or his group and the attack that killed the Indian soldiers. However, Islamabad has sought more evidence from New Delhi so that it can act against Azhar and his group.