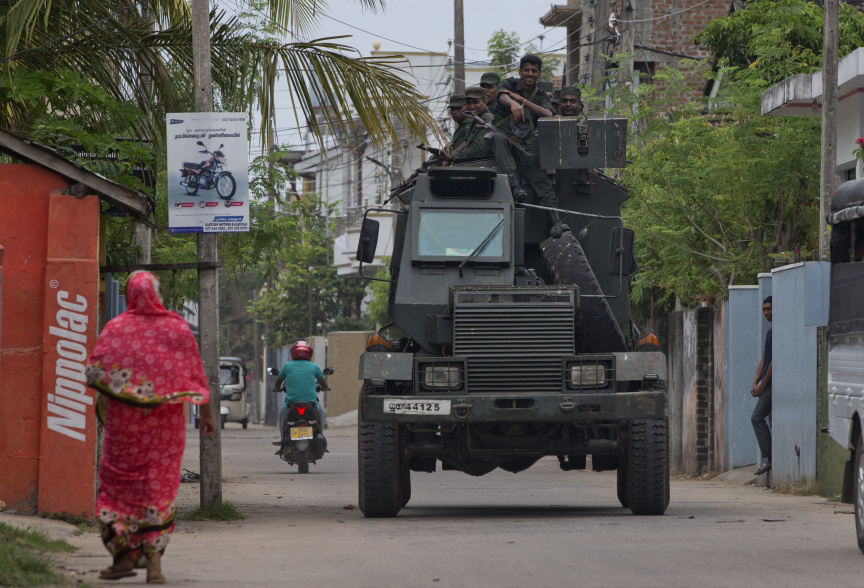 Soldiers return to their base following an operation searching for explosives and suspects tied to a local group of Islamic State militants in Kalmunai, Sri Lanka, Monday, April 29, 2019. (AP Photo/Gemunu Amarasinghe)

There are currently eight Maldivian citizens in custody of Sri Lankan authorities, reports Ministry of Foreign Affairs of Maldives.

Director of Communications at Ministry of Foreign Affairs, Miuwan Mohamed reported to ‘Sun’ this Wednesday that out of the eight Maldivian citizens currently in custody of Sri Lankan authorities, five were at remand facilities while the remaining four were at detention facilities.

Miuwan said that the Maldivian Embassy in Sri Lanka was keeping a close eye on the Maldivian detainees, and that embassy officials were attending court hearings and providing assistance to the detainees.

Scores of people have been taken into custody during the large search operation launched by Sri Lankan authorities following the Easter Sunday bombings of April 21.

13 Maldivian citizens were taken into custody during the search operation; four of whom were arrested for possession of a hunting rifle on an invalid license, and have since been released.

Two other Maldivian citizens were arrested after officers found a book on Islamic State (IS) from their residence. ‘Sun’ has been informed the book in question is easily available for purchase from bookshops, and was possessed by a Maldivian political science student who resides in the same apartment.

The court has remanded the two Maldivian citizens to 13 days in custody.

Several Maldivian families who reside in neighboring Sri Lanka have returned home to Maldives following the Easter Sunday bombings and the state of emergency declared in the country following the bombings.

Both Maldivian Embassy in Sri Lanka and Ministry of Foreign Affairs has advised Maldivian citizens in Sri Lanka to pay special attention to adhering to the laws and regulations of Sri Lanka, especially regarding visa-related affairs.