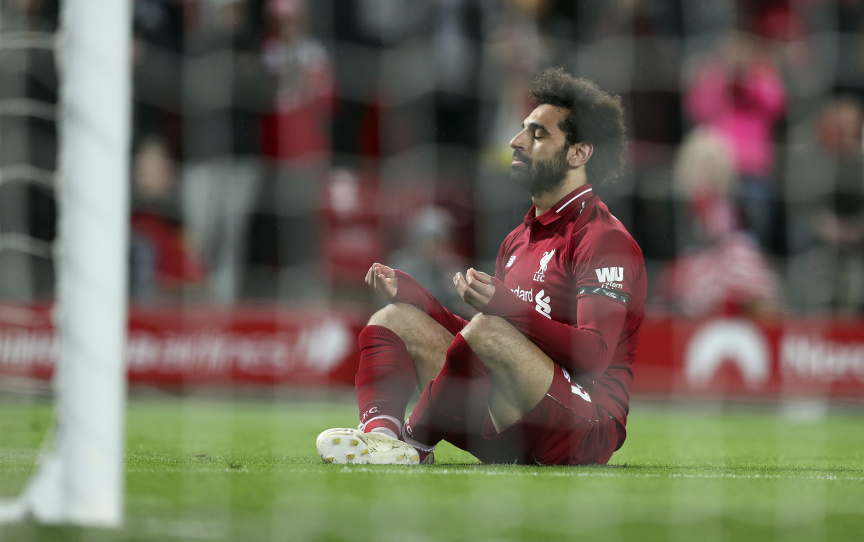 LIVERPOOL, England (AP) — Beating Manchester City to the title might not be the only thing occupying the minds of Liverpool forwards Mohamed Salah and Sadio Mane heading into the final two weeks of the Premier League season.

They are battling each other for the Golden Boot, too.

Salah and Mane became the top two in the league's scoring charts Friday after netting twice each in Liverpool's 5-0 win over already-relegated Huddersfield that lifted the team back into first place.

Salah has hit the front on 21 goals — leaving behind Man City striker Sergio Aguero and Arsenal's Pierre-Emerick Aubameyang, who both have 19 — as he looks to finish as top scorer for the second straight season.

Three days after walking the red carpet in New York as one of Time magazine's 100 most influential people in the world, he was back at Anfield in the red of Liverpool and scoring in each half. After his 83rd-minute goal that rounded off the scoring, Salah sat on the ground in front of The Kop in a meditation position before doing a backward roll to cheers from Liverpool fans.

Mane's place as a potential Golden Boot winner is more of a surprise. Only one goal behind Salah, the Senegal international is having easily the most prolific season of his career — his previous best tally being 13.

Both of his goals were headers from crosses and he also nodded a second-half effort against the post, with Liverpool manager Juergen Klopp comparing Mane's hang time to basketball great Michael Jordan.

"If you see him in the air, I'm not sure anybody jumped that high since Air Jordan! The third one, it looks like he stands in the air," Klopp said.

"He always had the ability," Klopp added, "but his mind set was more of a creator, a door-opener than somebody that runs through the door himself. But he has that within himself. You saw this season that he can play easily as a No.9 as well. That's cool."

Liverpool, seeking a first top-flight title since 1990, moved into a two-point lead and kept the pressure on City, whose game in hand is a tough-looking one at Burnley on Sunday. Both teams will have two more games to play after that in a title race that is set to go down to the wire.

Liverpool could yet end the season with 97 points — only City, last year, has earned more points than that — and still not win the title.

"If we do the job in these two games (against Newcastle and Wolverhampton Wanderers) and something happens in the other games, then we are there," Klopp said. "If not, then we did our best, our 100% best. You cannot ask for luck, or destiny, you have to work for it."

This was the easiest match facing either of the title contenders and it felt like target practice at times for Liverpool, which is now only three goals behind City in terms of goal difference — the first tiebreaker if the teams are level on points.

Liverpool cast aside any concerns about complacency against the league's last-place side by scoring its quickest goal in the Premier League, after just 15 seconds, as Naby Keita was played in by Salah following a Huddersfield mistake.

It came three days after Shane Long scored the fastest goal in Premier League history, after 7.69 seconds, for Southampton at Watford.

Mane made it 2-0 by heading in a left-wing cross from Andrew Robertson in the 23rd minute and Salah struck in first-half injury time, lobbing the goalkeeper after running onto Trent Alexander-Arnold's superb ball forward.

With striker Roberto Firmino missing the game with a groin injury, keeping his players free from injury was also a priority for Klopp ahead of next week's match against Barcelona in the Champions League semifinals.

A hush descended over Anfield early in the second half when Virgil van Dijk went down with an apparent injury. The center back shook his head while on the ground but eventually got up.

Mane headed in a cross from Jordan Henderson for 4-0 in the 66th and Salah completed the scoring in the 83rd by tapping in from another delivery from Robertson.

One of the biggest cheers of the night was reserved for Alex Oxlade-Chamberlain, who came on as a second-half substitute for his first appearance in a year after a serious knee injury. He almost scored, too, after a mazy run into the area.

"It would have been goal of the season if he could have scored that one," Klopp said.