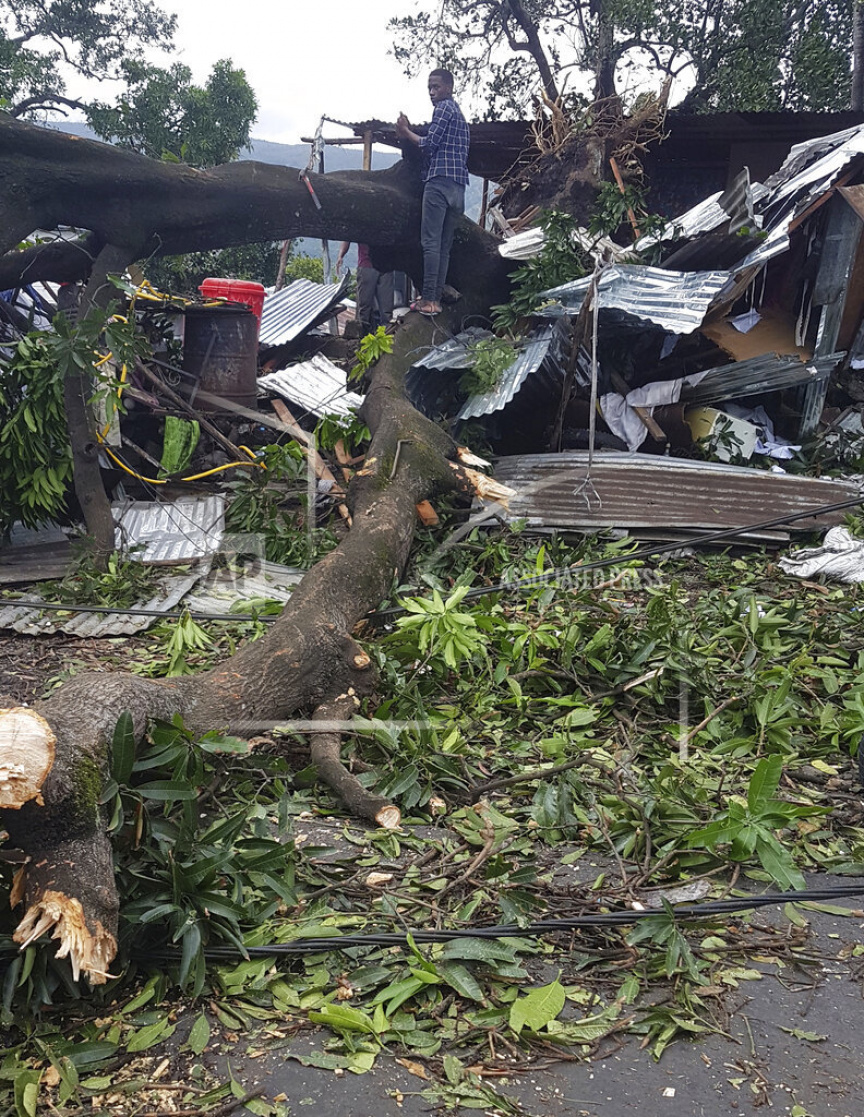 A man stands on fallen trees which damaged his home in Moroni, Comoros, Thursday, April 25, 2019 after Cyclone Kenneth hit the island nation of Comoros. As the powerful tropical cyclone is expected to make landfall by early Friday in northern Mozambique, just six weeks after Cyclone Idai devastated the the central part of the country and left hundreds dead. (AP PhotoAnziza M'Changama)

Cyclone Kenneth is expected to bring heavy rains and flooding to northeastern Mozambique, which was not hit by the earlier storm, and southern Tanzania, which told coastal residents to evacuate. The cyclone arrived in Mozambique north of the city of Pemba with maximum sustained winds of 220 kilometers (136 miles) per hour, the Joint Typhoon Warning Center said.

Mozambique is one of the world's poorest countries and the earlier storm, Cyclone Idai, wiped out crops in the southern African nation's breadbasket on the eve of harvest. Hundreds of thousands of people could face hunger in the months ahead, and a new storm bringing fresh flooding will further complicate efforts to recover.

This is the first time in known history that Mozambique has been hit by two cyclones in one season, United Nations spokesman Stephane Dujarric told reporters in New York.

The new cyclone threatens an area of Mozambique where residents are not used to such strong storms, the U.N. humanitarian agency said. That includes Cabo Delgado province, which has seen a rise in deadly militant attacks in recent months.

A video posted by Mozambique's disaster management office showed director Augusta Maita warning residents that the new storm could be as strong as Cyclone Idai. Compulsory evacuations began for some families, the office said, sharing a list of shelters that were mostly local schools.

The U.N. called Idai "one of the deadliest storms on record in the southern hemisphere," and another major storm again raised concerns about climate change. Low-lying Mozambique's 2,400-kilometer (1,500-mile) Indian Ocean coastline makes the country one of the world's most vulnerable to global warming's rising waters.

As it approached Mozambique, Cyclone Kenneth left people in the Indian Ocean island nation of Comoros without power, with some losing their homes. The U.N. said it was still assessing the extent of the damage.

In Tanzania, the government told students and workers in the southern regions of Lindi, Mtwara and Ruvuma to stay home but said people living near the coast should evacuate.

The U.N., the Red Cross and other aid organizations were bracing for what could be another large relief operation, again in mostly rural areas. The U.N. already had expressed concern that its $342 million aid appeal for what will be months of Cyclone Idai relief work in Mozambique and neighboring Zimbabwe is just 24% funded .

"Although floodwaters have receded in most areas affected by Cyclone Idai, access is still a challenge as infrastructure was severely compromised," U.N. World Food Program spokesman Herve Verhoosel said in a statement. "Another storm would be an additional blow for the people of Mozambique and further complicate the response in all areas."

He said the agency has 300 metric tons of "food commodities" already positioned in Mozambique's northern coastal towns of Palma and Mocimboa da Praia and that its local partner has been told to protect the warehouses to "weather the storm."

Cyclone Idai's effects will be felt for months, if not years. Even as authorities say a cholera outbreak is being contained, malaria is a growing concern. More than 14,800 cases have been reported since March 27 in the hard-hit province of Sofala alone, the U.N. children's agency said.

Mozambicans line up for cholera vaccines amid outbreak