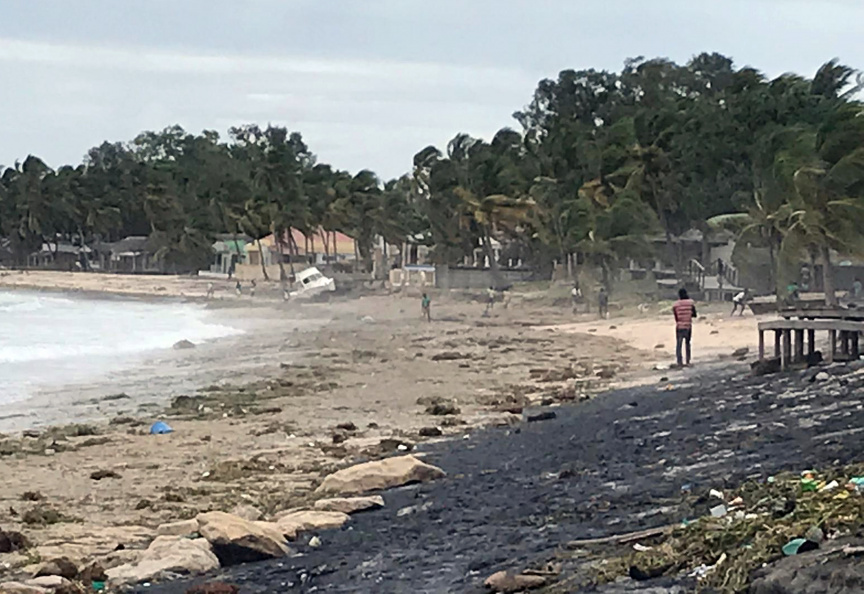 This photo supplied by World Food Programme shows the Wimbi Beach in Pemba, Mozambique, after Cyclone Kenneth made landfall Friday, April 26, 2019. At least one person is reported dead and homes have been destroyed after the powerful cyclone struck northern Mozambique and continues to dump rain on the region, with the United Nations warning of "massive flooding." Cyclone Kenneth arrived just six weeks after Cyclone Idai tore into central Mozambique, killing more than 600 people and displacing scores of thousands. (Nour Hemeci/World Food Programme via AP)

JOHANNESBURG (AP) — The second powerful cyclone to rip into Mozambique in just six weeks stunned residents Friday in a region where such storms had not been recorded in the modern era. Three deaths were reported from Cyclone Kenneth and the U.N. warned of "massive flooding" ahead.

Kenneth had maximum sustained winds of 220 kph (136 mph), equal to a Category 4 hurricane, before it made landfall Thursday evening in far northern Mozambique, the Joint Typhoon Warning Center said.

It was the first time in recorded history that the southern African nation has been hit by two cyclones in one season, the U.N. said.

More worryingly, the storm's remnants in the next 10 days could dump twice as much rain as Cyclone Idai did on central Mozambique last month, World Food Program spokesman Herve Verhoosel said. Idai killed more than 600 people and displaced scores of thousands.

Kenneth struck a part of Mozambique that had never seen such a fierce storm during the age of satellite observation, forecasters said, renewing concerns about climate change and the country's vulnerable, 2,400-kilometer (1,500-mile) Indian Ocean coastline.

Authorities issued warnings 24 hours before the storm arrived but "of course, no one really knows what a cyclone is," Jorg Salzer, a hotel owner on hard-hit Ibo island, told The Associated Press. "It's not a cyclone area."

He said two island residents were reported dead, and Mozambique's emergency operations center said a woman in the city of Pemba was killed by a falling tree.

About 90% of homes on Ibo island, a community of about 7,000 residents, were destroyed, the operations center said, as well as a large number of houses in the Macomia district of Cabo Delgado province.

While the region that took the brunt of Kenneth is more sparsely populated than the area hit by Idai, Mozambique's disaster management agency said nearly 700,000 people could be at risk, many left exposed and hungry as flood waters rise.

"Cyclone Kenneth may require a major new humanitarian operation" in one of the world's poorest nations, even as post-Cyclone Idai relief operations are expected to continue for months, U.N. humanitarian chief Mark Lowcock said.

The European Commission's emergency mapping service warned of a "very high probability" that coastal basins will flood in the days ahead.

"It's quite terrible," hotel owner Salzer said, adding that no outside aid had yet reached Ibo island. "I'm afraid of huge suffering for the people."

The cyclone cut off electricity on the island and toppled a mobile phone tower, cutting off communications, he said.

Early assessments from other areas were grim. Quissanga district reported "extensive damage" to houses, and communication links with the Macomia and Muidumbe districts were down, the International Federation of Red Cross and Red Crescent Societies said.

The aid group cited weekend forecasts of as much as 250 millimeters (9 inches) of torrential rain, or about a quarter of the average annual rainfall for the region. Macomia, Quissanga, Mocimboa da Praia and Mecufi districts were most at risk.

The U.N. children's agency, on the ground in Macomia, described families taking shelter in a church as Kenneth ripped apart their homes — only to watch as the church's own roof was torn away. Some schools were destroyed, it said.

The largest city in the cyclone-hit region, Pemba, had significant power outages.

"This is a very vulnerable area, higher in poverty" than the one hit by Cyclone Idai, Red Cross spokeswoman Katie Wilkes said.

Mozambicans line up for cholera vaccines amid outbreak