30-day visa exemption to Maldivians from Thailand kicks in 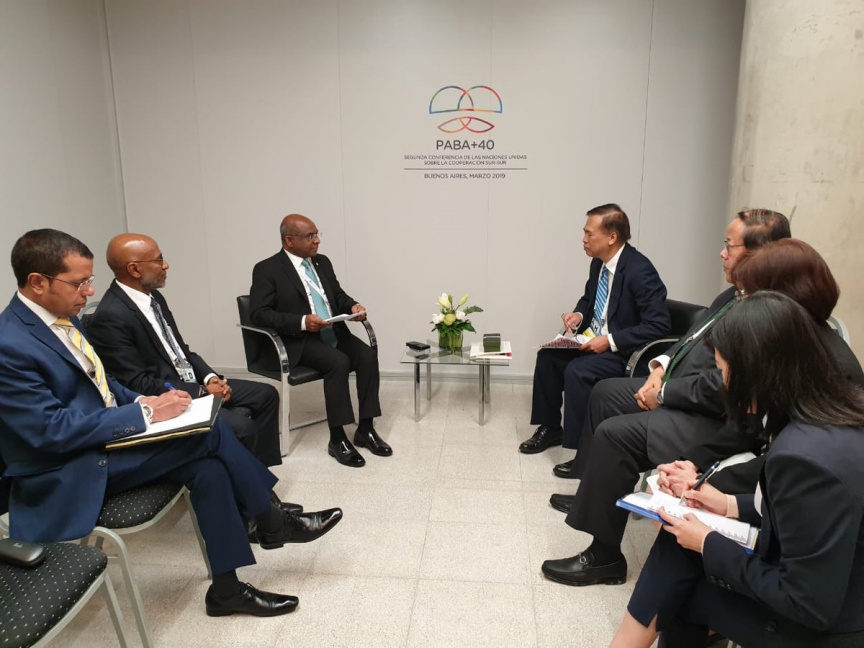 Minister of Foreign Affairs, Abdulla Shahid (CL) meets with the delegation from Thailand in the sidelines of the United Nations Conference on South- South Cooperation (BAPA+40) in Buenos Aires, Argentina, on March 20, 2019. (Photo/Twitter/Abdulla Shahid)

Maldivian tourists who travel to Thailand will receive 30-day on-arrival visas starting from this Sunday, reports Ministry of Foreign Affairs.

Thailand is a frequent destination for Maldivians for leisure, business and medical purposes.

Minister of Foreign Affairs of Maldives, Abdulla Shahid held discussions Thai officials to formalize the visa waiver arrangement between Maldives and Thailand at the sidelines of the United Nations Conference on South- South Cooperation (BAPA+40) in Argentina on March 20.

The Ministry of Foreign Affairs issued a statement this Sunday, announcing the beginning of the implementation of the visa exemption policy.

It has also detailed the requirements regarding the procedure.

Maldivians can enter Thailand without visa through land border checkpoints only twice a calendar year, from 1 January to 31 December.

Ministry of Foreign Affairs warns it is illegal to overstay in Thailand. Those caught in Thailand as an overstaying foreigner will be detained and face punishment, however, those who leave Thailand as an overstaying foreigner without being caught will only face a fine and possible ban from re-entering Thailand when exiting through immigration, and will not face any imprisonment or detainment.

The fine for overstaying is 500 Baht per day, reaching a maximum fine of 20,000 Baht (when overstaying 40 or more days).

Those who overstay for 90 or more days face the possibility of a ban from Thailand.

GUIDELINES FOR OVERSTAYING AND BANNING:

When caught at immigration while leaving Thailand, foreigners face the possibility of:

When caught outside of an international airport while overstaying:

Ministry of Foreign Affairs reports Shahid has met with government officials from over 50 countries and discussed visa facilitation.

Discussions are also underway to facilitate easier application for the Germany-Schengen Visa.