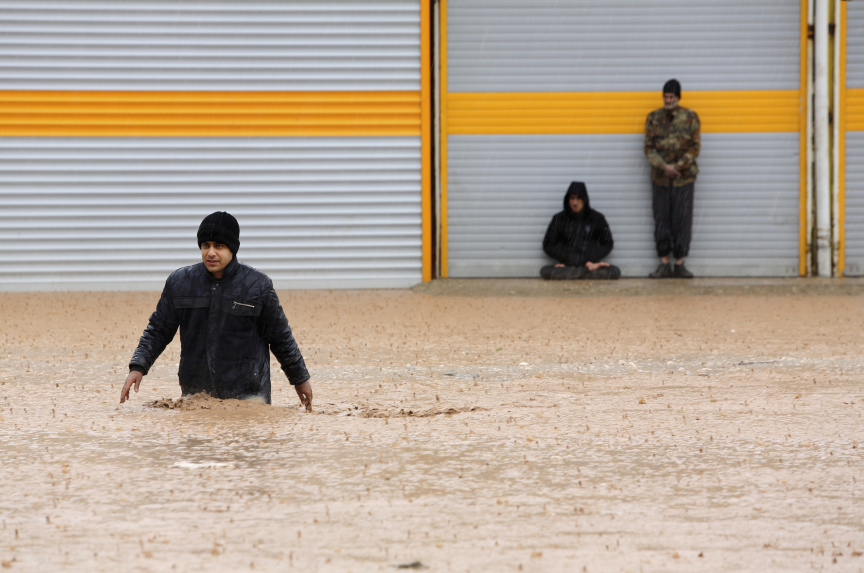 In this Monday, April 1, 2019 photo, a man crosses a flooded street in the city of Khorramabad in western province of Lorestan, Iran. (AP Photo/Saeed Soroush/Tasnim News Agency)

TEHRAN, Iran (AP) — Iranian authorities have ordered the evacuation of six more towns in the southwestern province of Khuzestan, which is widely inundated with floods, state TV reported on Saturday.

Evacuation orders came as a new round of raining and floods is expected.

Shariati said emergency discharges from dams and reservoirs were adding to the high floodwaters, but such measures were essential to prevent the dams from overflowing or catastrophic breaches, with river waters continuing to rise upstream from the province.

Young men were asked to remain behind to help with rescue operations.

Interior Minister Abdolreza Rahmani Fazli told state TV that some 400,000 people are at risk out of the province's population of five million.

Eleven towns and scores of villages have been already evacuated. There have been no evacuation orders for major cities, including the province's capital of Ahvaz, which has 1.7 million residents.

There have been no reports of damage to the province's petroleum facilities, which account for roughly 80 percent of Iran's oil production.

Authorities have put the number of dead at 70 people, as major flooding has hit the western half of the country, after years of drought.

Besides heavy rains, heavy damage from the floods has been blamed on widespread disregard for safety regulations in building and road constructions near rivers.