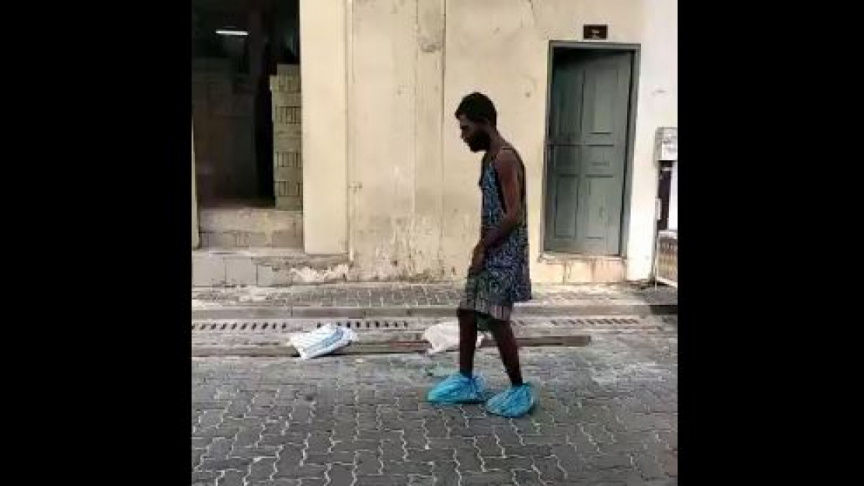 Authorities are keeping a close eye on the wellbeing of Ibrahim Rasheed, 25, from G. Fresh Light, says Minister of Gender, Family and Social Services, Shidhatha Shareef.

Rasheed, who was sentenced to seven years for assaulting a police officer during the May Day Protest in 2015 suffers from a form of dermatitis. He is frequently seen roaming the streets alone and in poor health.

Video of Rasheed walking down a street in Male’ City with plastic bags around his feet went viral over the social media last Tuesday. The video gained local media coverage and sparked widespread public concern over his situation.

#MayDay detainee Ibrahim Rasheed was perfectly healthy when he was detained in 2015.
He acquired a skin disease at Maafushi prison.
He was admitted at IGMH & was released him saying they cant keep him.
My source found him today in Karaa Goalhi/Galolhu Kanmathi & took this video. pic.twitter.com/1hFsP7sY6R

Minister Shidhatha tweeted this Wednesday morning that the State was closely monitoring the situation and that Rasheed has now been admitted to a health facility under the supervision of his family.

Nazim Abdul Sattar, who represented Rasheed during his trial, said that Rasheed had been in good health before his detention, and that he contracted the skin condition during his time in Maafushi Prison.

He said that Maldives Correctional Service transported him to the Indhira Gandhi Memorial Hospital (IGMH) two or three times during his time in prison.

This is not the first time for Rasheed’s situation to gain media attention.

Concern over his situation has been expressed in the past by his previous attorneys, as well as Ahmed Mahloof, current Minister of Youth, Sports and Community Empowerment who tweeted a picture of Rasheed.

Rasheed’s sentence was commuted to house arrest based on doctor’s instructions by Maldives Correctional Service in September, 2018.

However, Nazim Abdul Sattar reports he is not on good terms with his family.

Gov. settles loans taken by citizens in wake of tsunami