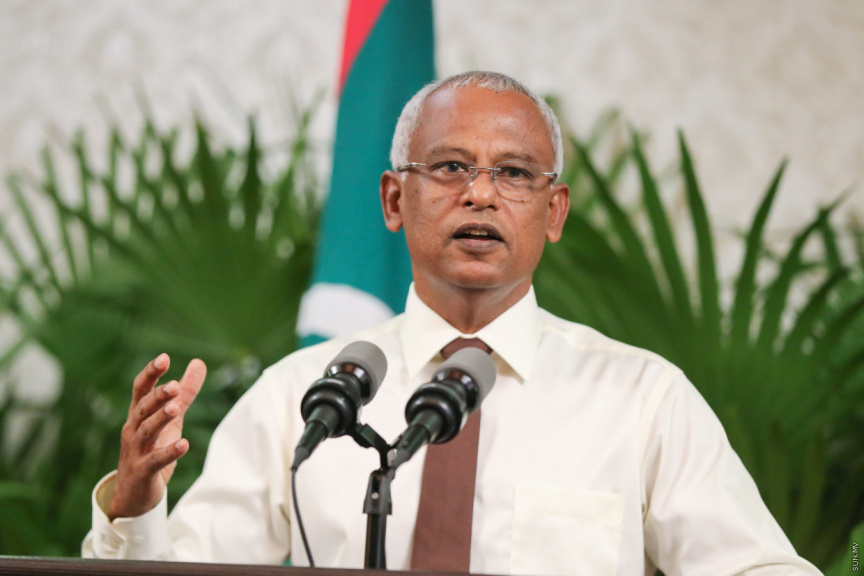 Solih made the announcement during the function held at the President’s Office this Thursday morning to mark the first 90 days of his administration.

He said the reduction in electricity charges took effect this March, and that the decision was designed to improve the quality of living of Maldivian citizens.

He said his administration aimed to fulfil the people’s most basic demands as soon as possible.

“This is a good change brought about by this administration in accordance with the policy to minimize differentiation between Male’ City and other Maldivian islands and the policy to establish a conducive setting for businesses,” said Solih.

Solih said the change to electricity charges means an end to age-old discrimination between Male’ City and other Maldivian islands in delivery of essential services, and unified electricity rates across Maldives.

He said the change will result in considerable reduction in electricity payments made by individual households in the atolls.

“For example, if a household currently pays MVR 2,200 for electricity, the household will hereafter need to pay only approximately MVR 1,700,” said Solih.

He said that his administration’s policy of developing small and medium enterprises (SMEs) was directly beneficial to citizens.

Solih said that the change to electricity charges will reduce expenditure by SMEs on electricity, leaving it with more profit, and more resources to expand its services to the general public.

“For example, businesses which operate in the atolls which currently pay MVR 4,600 for electricity will hereafter need to pay only approximately MVR 3,400. This is a MVR 1,200 in additional income which goes straight to the pockets of our citizens,” said Solih.

He said that the administration had decided to allow a fuel discount on all electricity bills after calculating the savings from cutting 5 percent duty on diesel.

“This welcome change will be visible on electricity bills. I made the decision to reduce electricity charges to reduce differentiation between Male’ City and the atolls. I felt this was necessary even if meant an additional burden to the State. I made this decision to establish a conducive environment for local businesses,” said Solih.

Solih said his administration’s long-term goal was to convert production of electricity in Maldives to renewable energy sources.

Over 500 officers mobilized for parliamentary elections