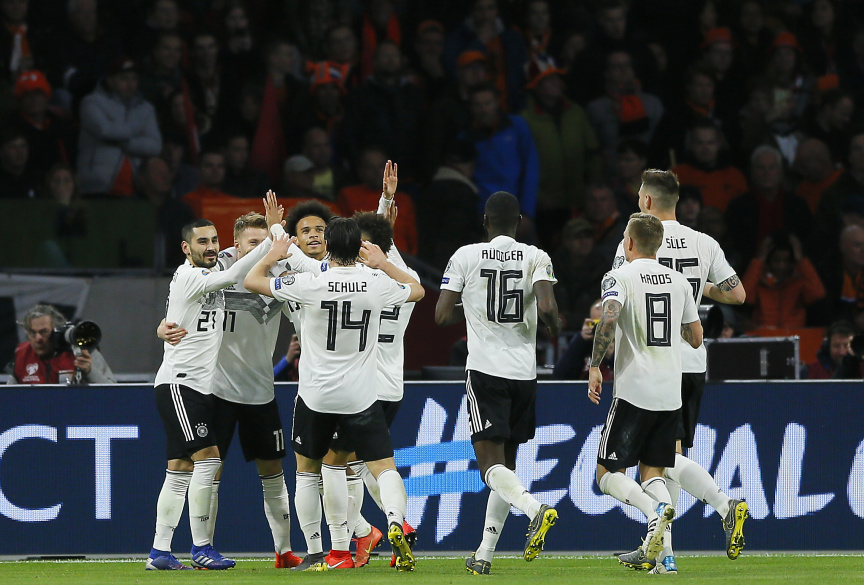 Germany's Nico Schulz, fourth from left, celebrates with his teammates after scoring his side's third goal during the Euro 2020 group C qualifying soccer match between Netherlands and Germany at the Johan Cruyff ArenA in Amsterdam, Sunday, March 24, 2019. (AP Photo/Peter Dejong)

Germany is winning again, and Croatia is struggling. The World Cup feels like a long time ago.

After a year of problems off the field — and humiliation on it — the new Germany is finally starting to look like the old Germany. Grit, determination and Nico Schulz's 90th-minute winner earned the Germans a confidence-boosting 3-2 win over the Netherlands on Sunday in a European Championship qualifier.

"It's good for the self-belief of this young team," said Germany coach Joachim Loew. "I can live with criticism. I know what our potential is."

Croatia looked a shadow of the resilient team which reached the World Cup final in July as it lost 2-1 to Hungary in Budapest. Spells of confusion in the Croatian defense are likely to concern coach Zlatko Dalic in a group where four teams look like contenders for two qualifying spots for Euro 2020.

Elsewhere, Wales started with a tense win over Slovakia, while Belgium and Poland enjoyed comfortable victories.

Facing old rivals the Netherlands for the third time in six months, Germany enjoyed its revenge.

The Dutch beat Germany 3-0 in Amsterdam in October and earned a last-gasp draw in the return fixture. Those results helped to relegate Germany from the top tier of the Nations League — further embarrassment after its disastrous 2018 World Cup campaign when it failed to advance from the group stage.

Schulz's winner came just when it looked like his team had let the Dutch salvage a draw from 2-0 down in the Group C game.

"We didn't control the ball and if you can't exert pressure the game opens up and you see that they have some amazing attackers," Netherlands coach Ronald Koeman said.

Germany had gone six competitive games without a win since beating Sweden at the World Cup.

The challenge now for Loew is to keep the momentum going — after all, the win over Sweden was seen at the time as a much-needed boost after a poor run. It proved a false dawn when Germany promptly lost to South Korea and spectacularly crashed out of the World Cup.

Croatia's defense was at times overwhelmed by a spirited Hungary team, conceding one goal to a fine passing move masterminded by Balazs Dzsudzsak, and the other after panicky set-piece defending.

Since losing the World Cup final to France, Croatia's results have been wildly inconsistent.

A 6-0 loss to Spain in the Nations League, a 3-2 win over Spain soon after and Thursday's labored 2-1 win over Azerbaijan have highlighted Croatia's moments of brilliance and its vulnerabilities after losing key players to international retirement and injury.

Earlier in the same group, Daniel James' first international goal gave Wales the lead after five minutes against Slovakia before holding on to win 1-0.

"It was a perfect start," Wales coach Ryan Giggs said, and he was full of praise for the 21-year-old James. "He is a talent, and when you have got that raw pace you are a threat at any level."

Croatia, Hungary, Wales and Slovakia are level on three points in Group E. Last-placed Azerbaijan has no points.

One hundred games for Belgium and Eden Hazard is still dangerous.

Hazard scored his 30th career international goal in his centenary game as Belgium beat Cyprus 2-0 to tighten its grip on Group I. Michy Batshuayi finished with a goal and an assist as Belgium eased to a routine win to stay top of the group with six points.

Valencia winger Denis Cheryshev scored two goals and set up another as Russia bounced back from its opening loss to Belgium on Thursday with a 4-0 dismantling of Kazakhstan.

Still mourning last week's loss to Kazakhstan, Scotland fans had little to celebrate as their team struggled to a 2-0 win over San Marino, the world's lowest-ranked team. Scotland, which hasn't qualified for a European Championship since 1996, is still guaranteed a playoff spot thanks to Nations League results.

Latvia's goalkeeper Pavels Steinbors made a string of spectacular saves before Robert Lewandowski broke the deadlock in the 76th minute with a header. Kamil Glik scored another header eight minutes later.

Austria gave up a 1-0 lead as it lost 4-2 to Israel and is level with Latvia at the bottom of the group with no points from its opening two games. Eran Zahavi scored a hat trick as Israel earned its first win over Austria for 20 years.

North Macedonia is level with Israel on four points after drawing 1-1 with Slovenia.