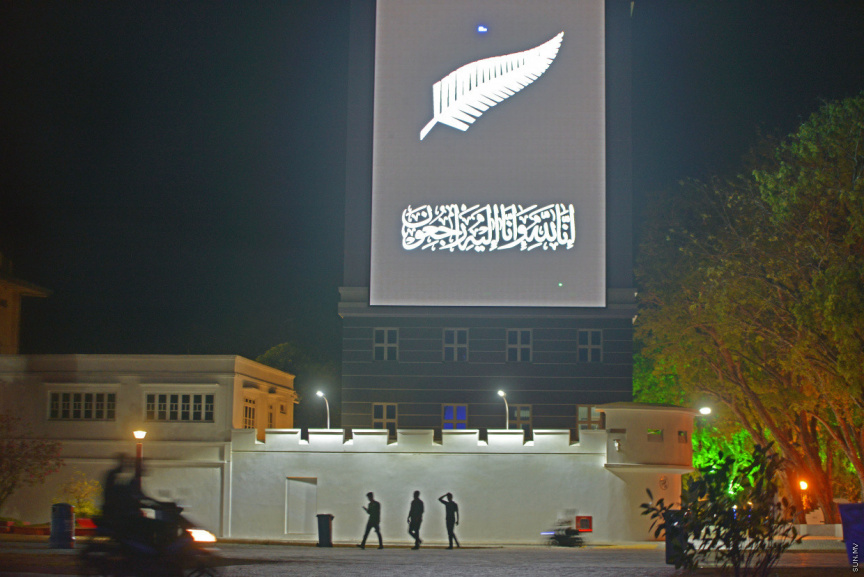 The Friday of March 15, 2019 will forever be marked as a dark day in the history of humankind. The day 50 people – many of them Muslim worshippers – were gunned down in cold blood at two mosques in Christchurch, New Zealand.

The senseless killings in the close-knit community also sparked an overwhelming show of support and solidarity from people of other faiths to the Muslims in Christchurch. Christians, Jews and Hindus continue to stand guard outside mosques as Muslims complete their prayers inside.

Countries from across the world have payed tribute to the victims of the massacre.

Many displaying the New Zealand symbol of the silver fern on national monuments such as the Sydney Opera House in Australia. And staging a minute of silence ahead of sporting events.

Maldives has followed suit by displaying the silver fern on the LED hanging from the Bandaara Koshi, the headquarters of Maldives National Defense Force.

Below were the words: We belong to Allah and to Allah we shall return.

“Terrorism has no religion, no color, and no country. Today we stand in solidarity with our slain brothers and sisters in New Zealand. Truly we belong to Allah, and unto Him we return,” wrote the National Counter Terrorism Center in a tweet.

Terrorism has no religion, no colour, and no country. Today we stand in solidarity with our slain brothers and sisters in New Zealand. Truly we belong to Allah, and unto Him we return. #ChristchurchMosqueAttack pic.twitter.com/rBATnfyDWJ

The New Zealand Prime Minister Jacinda Ardern, when asked by the press what her message to the international community in the wake of the massacre was, replied "To offer sympathy and love to all Muslim communities."