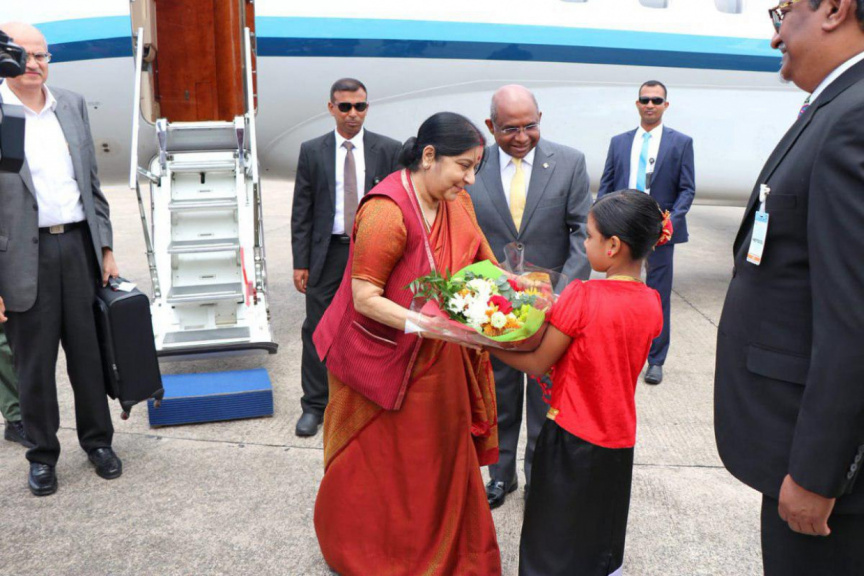 Minister of External Affairs of India, Sushma Swaraj is greeted upon arrival at the Velana International Airport for a two-day official visit on March 17, 2019. (Photo/Ministry of Foreign Affairs)

Swaraj was received from the Velana International Airport by the Minister of Foreign Affairs of Maldives, Abdulla Shahid and senior officials of the Ministry.

Swaraj, during her two-day visit, is scheduled to call on President Ibrahim Mohamed Solih and Speaker of Parliament Qasim Ibrahim. She is also scheduled for one-on-one meetings with Minister Shahid and Minister of Home Affairs, Sheikh Imran Abdulla.

Discussions will be held regarding ongoing projects and future collaborations between India and Maldives. Both the governments will also discuss the implementation of the agreed outcomes of the State Visit of President Solih to India last December.

The discussions will be focused on development cooperation, cooperation in the field of health, and enhancing the ongoing friendship between the people of both the countries.

Sushma Swaraj is visiting the Maldives at the invitation of Minister Shahid.