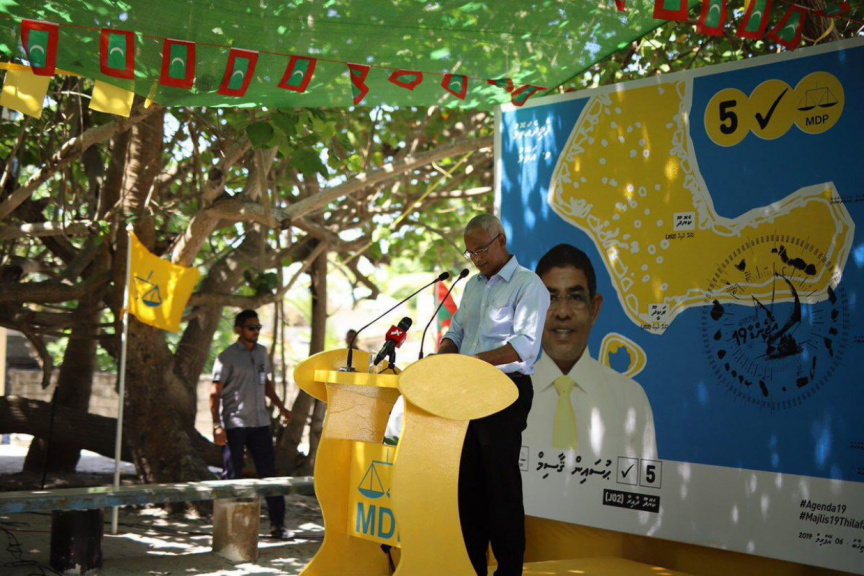 Launching the campaign of MDP’s candidate for the V. Keyodhoo constituency this Thursday morning, Solih stressed the need to elect government lawmakers and lawmakers who believe in the Agenda 19 to the Parliament.

“Agenda 19 – compiled by MDP to detail my electoral pledges is of vital importance. In Agenda 19, you will find details of the pledges I made to come to power,” said Solih.

“In order to bring about our proposed amendments, the necessary legal amendments, we need people who believe in this and support this [at the Parliament],” he said.

Solih provided assurance his administration will fulfil its pledge to provide water and sanitation services to all inhabited Maldivian islands.

“I pledged to conduct development projects irrespective of specific island, atoll, or population level. I assure you I will not leave behind any island in my bid for national development,” said Solih.

Solih, during his speech, expressed appreciation for the hard work of multiple political parties and countless citizens to elect him to office.

He said that none of the political parties or individual citizens would have any reason to regret their effort.

“My victory during the last presidential election is due to the hard work of MDP, Jumhoory Party, Adhaalath Party, President Maumoon and so many others. I shall never forget this. And I will not let anything bad happen to any of them, or any of the parties,” said Solih.

JP ministers within Solih’s Cabinet, meanwhile, have renounced the 32 of PPM and PNC’s candidates endorsed by JP.

Cabinet ministers who have publicly renounced the candidates include Minister of Transport and Civil Aviation, Aishath Nahula, who is the spouse of Qasim Ibrahim – Leader of JP and Speaker of Parliament.