President calls for unity within coalition, vows there will be no cause for regret 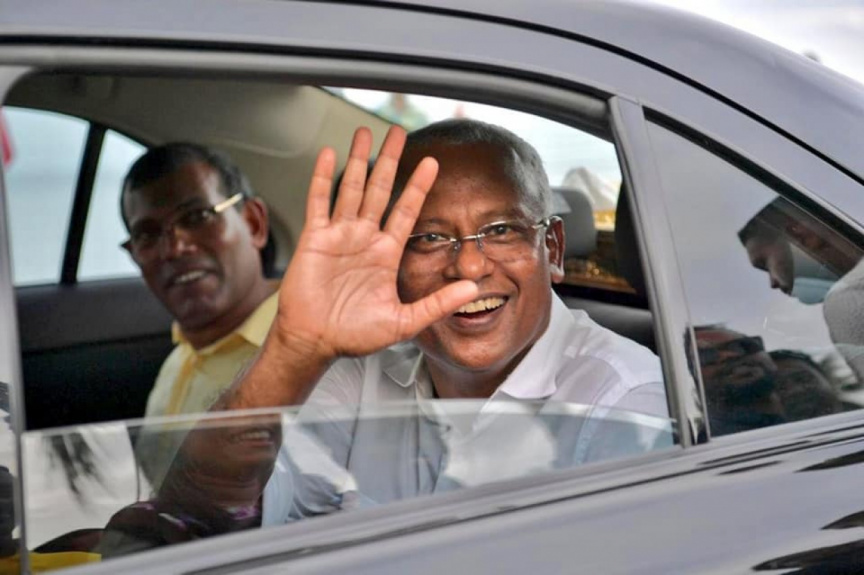 President Ibrahim Mohamed Solih waves as former President and Leader of MDP, Mohamed Nasheed looks on as they drive past a street in Addu City on March 9, 2019. (Photo/Twitter/MDP)

President Ibrahim Mohamed Solih says the hard work of political parties and members of the general public to elect the current administration to office has not been forgotten and has called for unity among the coalition parties and pro-government supporters.

Solih is currently on a campaign tour of Addu City with former Maldivian President and Leader of Maldivian Democratic Party (MDP) Mohamed Nasheed to gather support for the party’s candidates for the upcoming parliamentary elections.

During a campaign event in Hulhudhoo, this Saturday morning, Solih began by saying that he was in Addu City on behalf of MDP, and that he would have had much more to say if he were there as Maldivian President.

“But since this is a campaign tour, I will employ some constraints, said Solih, launching the campaign for MDP’s candidate for the Holhudhoo constituency, Ilyas Labeeb.

The President jested that he wasn’t elected President because “I’m handsome or light-skinned”, but based on his pledges and the confidence he will fulfill his pledges.

Solih declared that he would never forget the hard work of MDP, Jumhoory Party (JP), Adhaalath Party (AP), Maumoon Reform Movement (MRM) and the countless others who secured him his seat.

“And I reassure everyone from all these parties again today, none of you will have cause for regret from anything we are doing. Stand with us this time,” said Solih.

Solih’s comments come after the understanding between the coalition parties to contest in the parliamentary elections together failed. MDP has decided not to compromise any seats, and JP decided to ally itself with PPM and PNC for the elections.

JP, PPM and PNC have now confirmed they will be endorsing a number of each other’s candidates in the elections.

Helmet regulation to kick in at midnight