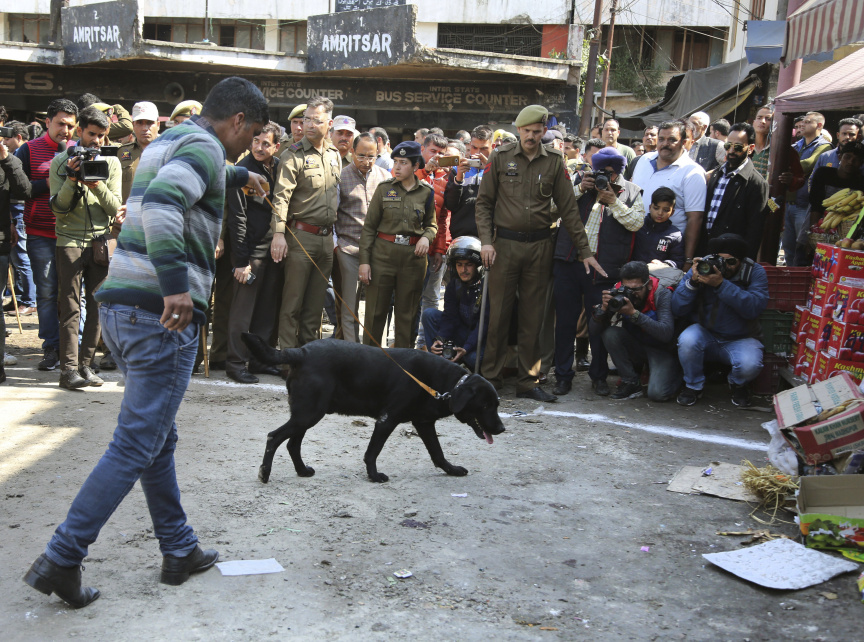 A sniffer dog and policemen inspect the site of a grenade attack in Jammu, India, Thursday, March 7, 2019. (AP Photo/Channi Anand)

SRINAGAR, India (AP) — At least 18 people were injured, four critically, by a grenade blast at a bus station in the Indian-controlled portion of Kashmir on Thursday, police said.

The grenade was hurled at the main bus station in Jammu city and rolled beneath a bus, where it exploded, police said. The injured were taken to a hospital, including at least four who were in critical condition.

Police said they are investigating who was responsible.

In the past, Indian authorities have blamed rebels fighting against Indian rule in the disputed region for similar grenade attacks, often without producing any evidence. Rebels have in turn accused government agents of carrying out the attacks to defame their movement.

Authorities rushed police reinforcements to the area and sealed off the road to try to apprehend the grenade-thrower.

Jammu, a Hindu-majority city, experienced days of protests following a Feb. 14 suicide bombing in Indian-controlled Kashmir that killed 40 Indian paramilitary soldiers, the deadliest attack against Indian forces since the start of an armed rebellion in 1989 by mostly Muslim residents in the disputed Himalayan region. Hundreds of Hindu nationalists attacked Muslim neighborhoods in the city, burning vehicles and hurling rocks at homes. Authorities imposed a curfew for several days in the city.

Archrivals India and Pakistan each administer part of Kashmir, but both claim the region in its entirety. Most Kashmiris support the rebels' demand that the territory be united either under Pakistani rule or as an independent country, while also participating in civilian street protests against Indian control.

About 70,000 people have been killed in the uprising and the ensuing Indian crackdown since 1989.