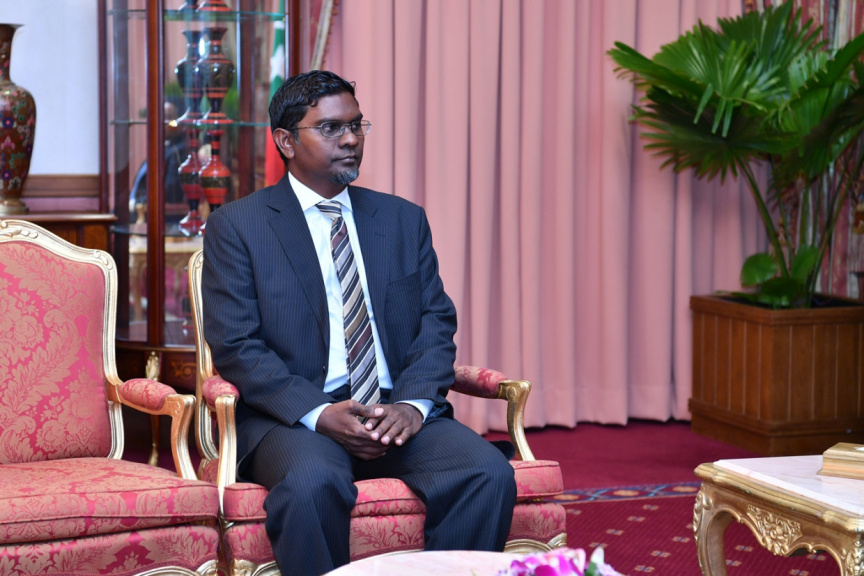 ‘Sun’ has been informed the complaint was lodged by Abdulla Ashraf, former Head of Financial Intelligence Unit (FIU) of MMA. He lodged the complaint alleging the Governor obstructed him from carrying out his official legal duties.

FIU is an independent unit within the MMA which is charged with flagging suspicious transactions involving money laundering and terrorism funding, and bringing such cases to the attention of investigative authorities.

Ashraf has also lodged the case against the Governor with the Board of Directors of MMA and the Public Finance Committee of the Parliament.

‘Sun’ has received a copy of the letter sent by Ashraf to the Chair of Public Finance Committee.

Ashraf, in his letter, wrote that Governor Naseer, near Presidential Elections 2018, ordered him to discontinue reporting high-profile cases.

Governor Naseer was not immediately available for comment regarding the investigation despite repeated calls by ‘Sun’.

Ashraf, Governor Naseer and another former Head of FIU – Ibrahim Athif Shakoor were questioned by the Public Finance Committee this Tuesday.

Press was barred from the Public Finance Committee meetings this Tuesday due to the sensitivity of the information under discussion.

Obstruction of legal duty is ranked Level I under Section 533 of the Penal Code.

The mandatory minimum sentence for the offense is four months and 24 days in prison. But the Governor may face up to one year in prison if found guilty of the offense.

SUMMARY OF THE LETTER

Ashraf’s letter to the Public Finance Committee reads that Governor Naseer expressed displeasure over the FIU’s decision to report the cases, and asked Ashraf to hold off reporting high-profile cases no near the presidential elections.

Section 30 of Money Laundering and Terrorism Finance Act provides FIU with the full autonomy to carry out its mandated duties.

Ashraf was dismissed from his post as Head of FIU and transferred to a newly created post within the MMA on September 17.

“Based on the aforementioned factors, the Governor’s actions and his words, I believe he attempted to prevent the Financial Intelligence Unit from carrying out some of its important tasks will full independence. I note that this is an offense codified in the Penal Code. I therefore note that I lodged a case with Maldives Police Service for investigation into this matter on January 30, 2019,” wrote Ashraf.

Ashraf sent the letter to the Public Finance Committee asking that it investigative Governor Naseer under Section 11 (a) (9) of Regulations of the Parliament for undue influence.

He wrote that it was the Governor’s responsibility to ensure and uphold the legal autonomy awarded to the FIU under Section 30 of Money Laundering and Terrorism Finance Act. But that the decision by Naseer to dismiss him “without any basis” was an act of undue influence.