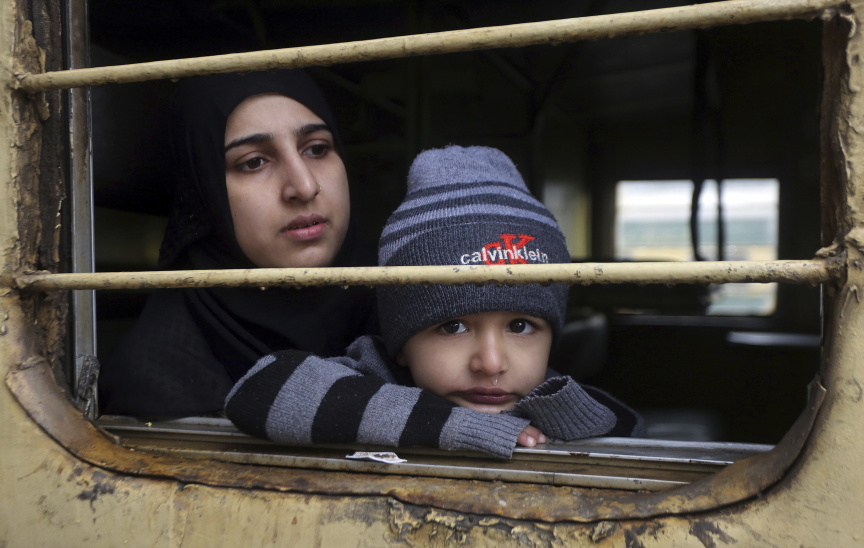 A passenger looks out from a train on her way to India, after being stranded in Pakistan for a week, at Lahore Railway Station in Pakistan, Monday, March 4, 2019. (AP Photo/K.M. Chaudary)

LAHORE, Pakistan (AP) — A key train service with neighboring India resumed and schools in Pakistani Kashmir opened Monday in another sign of easing tensions between the two nuclear-armed rivals since a major escalation last week over the disputed Kashmir region.

Pakistan Railways spokesman Ejaz Shah said the train service, known as the Samjhauta Express, left the eastern city of Lahore for India's border town of Atari, with some 180 passengers on board.

Pakistan retaliated, shooting down a fighter jet the next day and detaining its pilot, who was returned to India two days later.

Also Monday, schools in Pakistan-controlled Kashmir opened after seven days of closure amid the heightened tensions.

Raja Jaleel, head teacher at a secondary school in Chakothi, which is close to the Line of Control border in the disputed region, said classes resumed but attendance was thin.

He lauded the courage of the students who attended, as many of the area's parents are keeping their children home for their safety.

"We have started our day with prayers for peace," said the head teacher, adding that the students also chanted slogans in support of the army.

Schools were closed when Indian and Pakistani troops were trading fire across the Line of Control. At least eight civilians and two soldiers have been killed in Pakistani-controlled Kashmir since tensions soared following India's airstrike last Tuesday.

The reopening of schools on the Pakistani side of Kashmir and the resumption of the train service amid the lull in the crossfire for the second consecutive day suggests that the two nuclear-armed rivals have heeded international calls to exercise restraint. But Pakistan hasn't yet opened its airspace for flights to or from the east.

Senior civil aviation official Aamir Mahboob said that there was "no change yet in our aviation policy toward east but the west corridor is open for all flights."

After the suicide bombing on Feb 14 in the Pulwama district of Indian-controlled Kashmir, Indian jets crossed into Pakistani Kashmir and then into the Balakot section of Khyber Pakhtunkhwa province where they dropped bombs. India claimed its jets struck the militants behind the Pulwama attack. Pakistan denied that any such militant base existed in the area or that was hit by jets. Next day Pakistan shot down two Indian jets and detained a pilot who landed on the Pakistani side. He was handed back to India in a gesture of peace two days later.

Kashmir has been divided between India and Pakistan since their independence from British rule in 1947. Both countries claim the territory in its entirety and have fought two of their three wars over it. The rivals struck a cease-fire deal in 2003 but regularly trade cross-border fire.