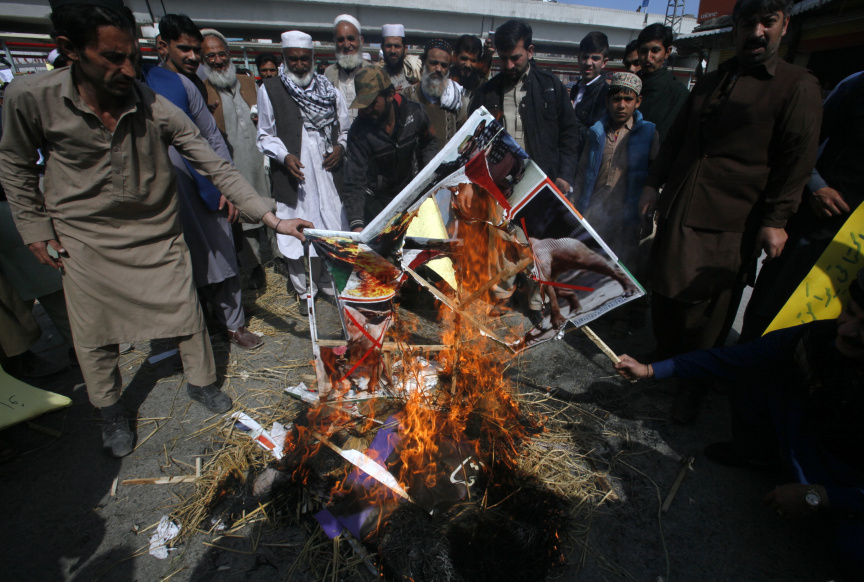 Pakistani protesters burn an effigy and posters of Indian Prime Minister Narendra Modi during a rally to denounce the recent killings by Indian forces in the disputed Himalayan region of Kashmir, in Peshawar, Pakistan, Monday, Feb. 25, 2019. (AP Photo/Muhammad Sajjad)

ISLAMABAD (AP) — Pakistan's military spokesman tweeted that Indian aircraft crossed into Pakistan on Tuesday and carried out an airstrike but said there were no casualties from the attack.

Maj. Gen Asif Ghafoor said the Indian "aircrafts" crossed into the Pakistan-controlled Muzafarabad sector of Kashmir. He added that Pakistan scrambled fighter jets and before turning back, the Indian jets they "released payload in haste," near Balakot, on the edge of Pakistani-ruled Kashmir.

The incursion could have been in retaliation for a deadly Feb. 14 suicide bombing in India's half of Kashmir that killed at least 40 troops. The Pakistan-based militant group Jaish-e-Mohammad claimed responsibility. The bomber who made a video before the attack was a resident of Indian Kashmir.

Pakistan and India both lay claim to a united Kashmir.