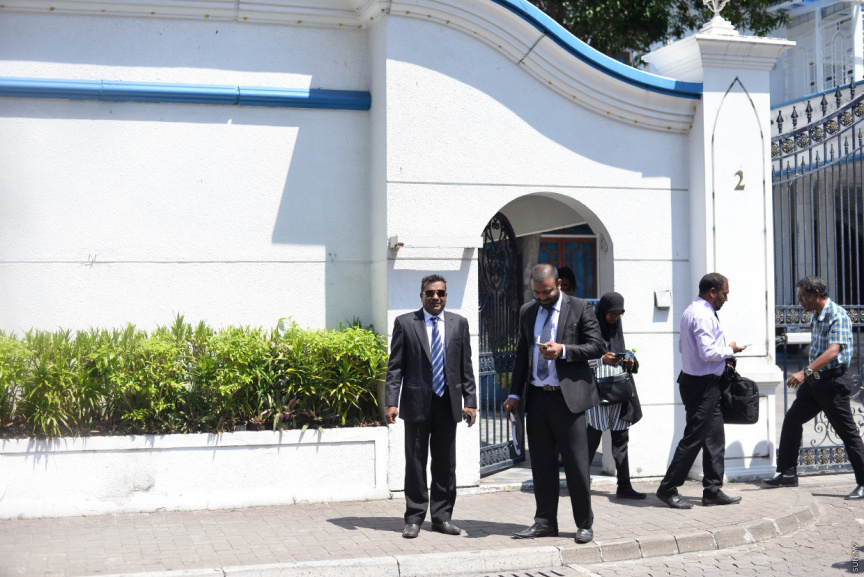 (From L-R) Special Envoy to the President, Abdulla Jabir and Attorney-at-Law Abdul Maaniu Hussain outside Supreme Court after the hearing on February 25, 2019. (Sun Photo/Fayaz Moosa)

Supreme Court, this Monday, ruled candidates defeated in party primaries can contest in the upcoming parliamentary elections as independent candidates.

The top court issued the ruling following cases filed with the court asking it to annul the amendment to Political Parties Act which disqualifies candidates defeated in primaries from contesting in national elections.

It was Chief Justice Dr. Didi who issued the injunction.

The court also issued an injunction, ordering Elections Commission to re-open application solely for candidates defeated in primaries who wish to contest in the parliamentary elections as independent candidates until March 4.

The court, in its ruling, established that the constriction on candidates defeated in party primaries from contesting in national elections in any other form placed constrictions on the basic right to contest in elections guaranteed by the Maldivian Constitution, and that the section of the law therefore conflicted with the Constitution itself.

The ruling addressed the argument made the attorney from Attorney General’s Office who stressed that the policy for disqualifying candidates defeated in primaries from elections has been adopted by many US states.

The court said the policy was highly controversial and highly contested at US courts.

The court said that some US states, unlike Maldives, allowed non-party members to contest in party primaries. It also stressed the lack of sufficient mechanism to monitor and regulate party primaries in Maldives.

The now-annulled Article 10 of Political Parties Act was submitted to the Parliament by then-PPM member and Vilingili MP Saud Hussain in 2016.