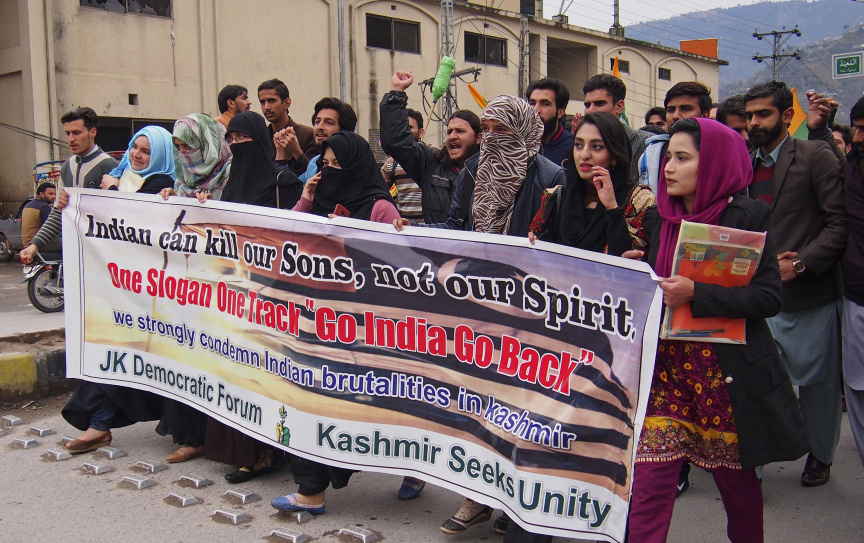 According to a Pakistani official, Shahid Mehmood, Indian authorities suspended the bus service this week without explanation.

The development comes amid escalated tensions between Pakistan and India in the wake of last week's deadly suicide bombing in Kashmir against Indian paramilitary troops. At least 40 Indian soldiers were killed in Thursday's attack, which New Delhi blamed on Islamabad.

Pakistan condemned the attack but cautioned India against linking it to the bombing without an investigation.

An Indian official confirmed the bus service was halted on Monday. He spoke on condition of anonymity because he was not authorized to talk to reporters.

The bus service between Muzaffarabad, the capital of Pakistan's part of Kashmir, and Srinagar, the capital of Indian-controlled Kashmir, was suspended so suddenly that travelers only learned about it when they went to the terminal. Private cars, motorcycles and other forms of transportation have long been banned.

The bus line, launched in 2005, served to reunite families on separate sides of the heavily militarized Line of Control.

"I came to Muzaffarabad from Rawalpindi to welcome my cousin but was told that no bus will come from Srinagar," said Zareena Bibi, a 43-year-old Pakistani woman.

Shehzada Akhtar, a 56-year-old woman from the Shopian area in Indian-controlled Kashmir, said she was prevented from traveling Monday following a death in her family on the other side of the line.

"I could not go to see my ailing uncle in 2016 when there was some tension between India and Pakistan," Akhtar explained. "Now when my uncle has passed away, I am again unable to share grief with my beloved cousins."

Angered over the suspension of bus service, dozens of people rallied in Muzaffarabad on Wednesday.

Pakistani and Indian troops exchanged fire on the border between their sectors, Pakistani police official Mohammad Altaf said. Lt. Col. Devender Anand, an Indian army spokesman, accused Pakistani forces of initiating the exchange. There were no casualties, he said.

Also Wednesday, Indian official Rajesh Kumar said authorities were investigating the killing by fellow inmates of a jailed Pakistani held in the Indian city of Jaipur.

In Islamabad, the foreign ministry said it was in touch with New Delhi about reports that the detainee, Shakir Ullah, was beaten to death by "Indian inmates in retaliation" for last week's suicide bombing in Indian-controlled Kashmir.

That attack was the worst against Indian forces in the history of the disputed region, where rebels have been fighting Indian rule since 1989.

Since independence from Britain in 1947, Pakistan and India — both nuclear-armed nations — have fought two of their three wars over Kashmir, which is divided between the two but claimed by each in its entirety.

Exchange of fire with India kills boy in Kashmir

At least 150 die from tainted liquor in India