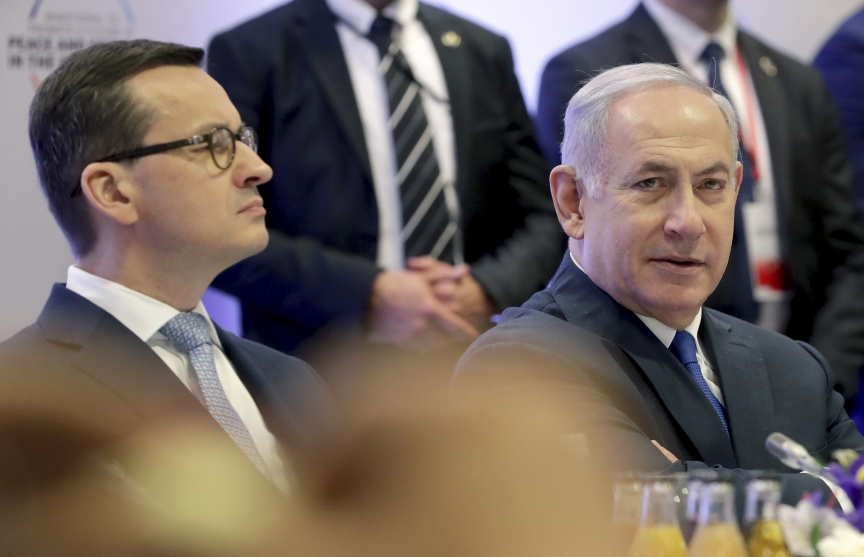 JERUSALEM (AP) — Poland on Monday withdrew from a European summit in Jerusalem, derailing the meeting and embarrassing its Israeli hosts, to protest claims by Israel's acting foreign minister that Poles collaborated with the Nazis and "suckled anti-Semitism with their mothers' milk."

The abrupt cancellation marked a new low in a bitter and long-running conflict between Poland and Israel over how to characterize Polish actions toward its Jewish community during World War II.

It also was a diplomatic setback for Israeli Prime Minister Benjamin Netanyahu, who had touted the gathering as a milestone in his outreach to the emerging democracies of central and eastern Europe. Netanyahu has courted these countries to counter the criticism Israel typically faces in international forums.

Tuesday's meeting of the leaders of Poland, Hungary, Slovakia and the Czech Republic — known as the Visegrad group — was to be the first time the summit has been held outside of Europe.

The gathering began to unravel last week when Netanyahu, during a visit to Warsaw, told reporters that "Poles cooperated with the Nazis." The comments infuriated his Polish hosts, who reject suggestions that their country collaborated with Hitler.

Poland's prime minister, Mateusz Morawiecki, announced Sunday that he was pulling out of the summit and that his foreign minister would go instead.

But Morawiecki canceled Polish participation altogether after the comments made by Israel's acting foreign minister, Israel Katz, that he denounced as "racist" and "absolutely unacceptable."

Katz, who was only appointed to the foreign minister's post on Sunday, made his remarks in a pair of TV interviews.

Noting that he himself is a child of Holocaust survivors, Katz said that "Poles collaborated with the Nazis, definitely." He then quoted the late former Prime Minister Yitzhak Shamir, who said that Poles "suckled anti-Semitism with their mothers' milk."

Israel's Foreign Ministry confirmed Monday that the summit had been called off, saying all four European countries had to be present.

Instead, a government official said that Netanyahu and the three remaining European leaders were expected to hold a series of bilateral meetings on Tuesday, along with a group news conference and joint lunch. The official spoke on condition of anonymity because the schedule had still not been finalized.

Netanyahu, in a speech Monday to visiting Jewish American leaders, made no mention of the crisis.

Poland was the first country invaded and occupied by Adolf Hitler's regime and never had a collaborationist government. Members of Poland's resistance and government-in-exile struggled to warn the world about the mass killing of Jews, and thousands of Poles risked their lives to help Jews.

However, Holocaust researchers have collected ample evidence of Polish villagers who murdered Jews fleeing the Nazis, or Polish blackmailers who preyed on helpless Jews for financial gain. Many of Israel's founding generation, including Shamir, fled anti-Semitism in Poland or elsewhere in eastern Europe in their youths, and Shamir has said his father was murdered by Poles.

These dueling narratives have been a source of great tension between Israel and Poland, which otherwise have strong relations.

Last year, Poland and Israel were embroiled in a bitter dispute over a Polish law that made it a crime to blame the Polish nation for complicity in the Holocaust.

Israeli officials saw it as an attempt by Poland to suppress discussion of the killing of Jews by Poles during and after the wartime German occupation. Netanyahu faced criticism from historians in Israel for not opposing the law, which critics said distorted history.

Critics also have accused Netanyahu of cozying up too closely to other nationalistic leaders in eastern and central Europe who have promoted a distorted image of the Holocaust and turning a blind eye to anti-Semitism. These include the Hungarian Prime Minister, Viktor Orban, another participant at the Israeli-hosted gathering.

Lost in the diplomatic uproar was that Netanyahu was actually defending his close alliance with Poland and other eastern European leaders when he made the comments that offended the Poles.

In response to a question from The Associated Press during his two-day visit to Warsaw, Netanyahu said he has raised the issue of historical revisionism with the various leaders. He rejected the notion he was a partner to diminishing anyone's complicity in the genocide of Jews in World War II.

"I know the history. I don't starch it and I don't whitewash it," he said.

Netanyahu is seeking re-election in April, and it is possible both he and Katz are trying to gain favor with their nationalist base by standing up to Poland's criticism. Likewise, Poland's leaders are preparing for both national and European elections this year.

But Oded Eran, a former Israeli ambassador to the European Union, said the diplomatic cost clearly outweighed any domestic benefit.

"The abandonment or postponement of the Visegrad summit is a major blow to Netanyahu's foreign policy, which he has been developing for several years now," said Eran, a senior researcher at the Institute for National Security Studies think tank in Tel Aviv. "Any consolation he would get from a boost in the polls is completely outweighed by the damage he has done."

Jewish leaders in Poland issued a statement saying that Shamir's words about Polish anti-Semitism were "unjust" when he said them in 1989.

"They are even more unjust today, 30 years later, when so much has been done on both sides for a mutual understanding of our very difficult, but shared history," the statement added.

Jonathan Ornstein, head of the Jewish Community Center in Krakow, called on Katz to apologize or resign.

"As a proud Israeli and Polish citizen, I feel that Israeli Foreign Minister Yisrael Katz should apologize or resign after his offensive, xenophobic remarks about Poland. On his first day in office, no less. Truly Shameful," Ornstein said on Facebook.