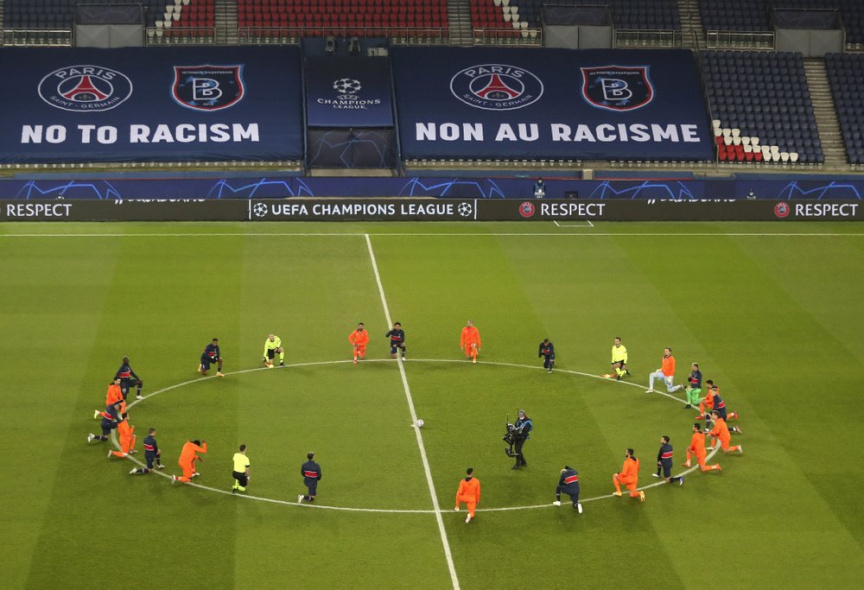 Basaksehir players kneel in support of the Black Lives Matter campaign before the start of the Champions League group H soccer match between Paris Saint Germain and Istanbul Basaksehir at the Parc des Princes stadium in Paris, France, Wednesday, Dec. 9, 2020. The match is resuming on Wednesday with a new refereeing team after players from Paris Saint-Germain and Istanbul Basaksehir left the field on Tuesday evening and didn't return when the fourth official — Sebastian Coltescu of Romania — was accused of using a racial term to identify Basaksehir assistant coach Pierre Webo before sending him off for his conduct on the sidelines. (Xavier Laine/Pool via AP)

Players have taken a knee, unfurled slogans and demanded tougher action only to find European soccer remains infested with racism.

But on Tuesday, at the end of a year of striking gestures against racial injustice and discrimination worldwide, elite players of the Champions League took the extraordinary step of refusing to continue playing in Paris after a match official was accused of using a racist slur.

In a show of solidarity, the players from Paris Saint-Germain and Istanbul Basaksehir left the field and didn’t return until Wednesday night, when play resumed with a new referee team.

Before the match restarted Wednesday, the players took a knee in unison as the Champions League anthem played, while some — including PSG star Neymar — raised a fist. PSG won the game 5-1, with Neymar scoring three of his team’s goals.

“The walk off by both Basaksehir and PSG together lays down a marker in Europe,” Piara Powar, executive director of the Football Against Racism in Europe anti-discrimination network, told The Associated Press. “Many players are fed up with half measures to tackle racism and are more prepared than ever to exercise their right to stop a match.”

The flashpoint came 14 minutes into Tuesday night’s game when referee Sebastian Coltescu of Romania was accused of using a racial term to identify Basaksehir assistant coach Pierre Webo, who is Black.

An enraged Webo demanded an explanation for the slur, repeating at least six times: “Why you say Negro?”

“You are racist,” Basaksehir coach Okan Buruk declared to Coltescu. “Why when you mention a Black guy, you have to say ‘This Black guy?’” added Basaksehir substitute Demba Ba, who is Black.

The exchanges were broadcast live around the world from soccer’s biggest club competition at PSG’s Parc des Princes. While racism at soccer games has typically come from the stands, the match Tuesday was played without fans because of the COVID-19 pandemic, and the lack of a crowd made the comments clear to hear.

Dismissing any attempts to excuse Coltescu’s language, French Sports Minister Roxana Maracineanu said Wednesday that “pointing at someone by their (skin) color is unacceptable and inexcusable” and praised the players.

“It’s unprecedented and sends a strong signal also to soccer institutions,” she said.

Powar, of the anti-discrimination FARE network, said there was no question the comment was racist.

“Our colleagues at the Romanian state anti-discrimination organization have confirmed it is racist in Romanian to refer to a player by using his race as an identifier,” said Powar, whose group helps UEFA, the Champions League competition organizer, prosecute discriminatory acts like Tuesday’s incident .

“There is no ambiguity. This incident shows the need for much better training of match officials. Unintentional racism is still racism,” Powar said.

Sports teams in the United States have also made their voices heard during a year of national reckoning against racial injustice in America. A Milwaukee Bucks boycott of their NBA playoff game this summer against the Orlando Magic to protest the police shooting of Jacob Blake, a Black man in their home state, cascaded into a wave of similar protests across the American sports scene.

The NBA postponed that game and two others in the playoff series, while three WNBA, five Major League Soccer and three Major League Baseball games were called off as athletes acted in solidarity with the Bucks’ players.

Meanwhile, the persistent racism infesting European soccer was on show again Wednesday in England, where a lower-league match was played with limited fans.

In the fourth division, Exeter City reported a suspected discriminatory comment by a fan toward a visiting player from Northampton Town. The referee spoke to the players and managers, and the game continued.

Earlier this year in Portugal, Porto striker Moussa Marega tried to walk off the field in February after being the target of racist abuse from fans in a game against Guimarães and demanded to be substituted. But he faced attempts by his own teammates and opposing players to prevent him from leaving the field.

The referee then gave Marega a yellow card for refusing to continue in the game — the type of action that dissuades players from walking off.

The Romanian referee who was in charge of the game in Paris on Tuesday — Ovidiu Hategan — was in the same role for the 2013 Champions League game when Manchester City player Yaya Toure complained about the lack of action against monkey noises he heard from CSKA Moscow fans.

“If officials cannot set the standards by their own behavior,” Powar said, “they cannot be relied on to deal with racism on the pitch or in the stands.”

Players might now feel more emboldened to leave the field after seeing the largely positive reaction to what happened Tuesday in Paris.

“What they’ve done was very good from both sides to support those who were in the incident,” said Japhet Tanganga, a defender with Premier League club Tottenham, who is Black.

But the dismissive response from Jorge Jesus, the coach of Portuguese club Benfica, reinforced why activists face ongoing challenges trying to change attitudes.

George Floyd's funeral gets underway in Houston, US