Ali Zahir: Hesitance of people to blow the whistle, a threat to eliminating corruption 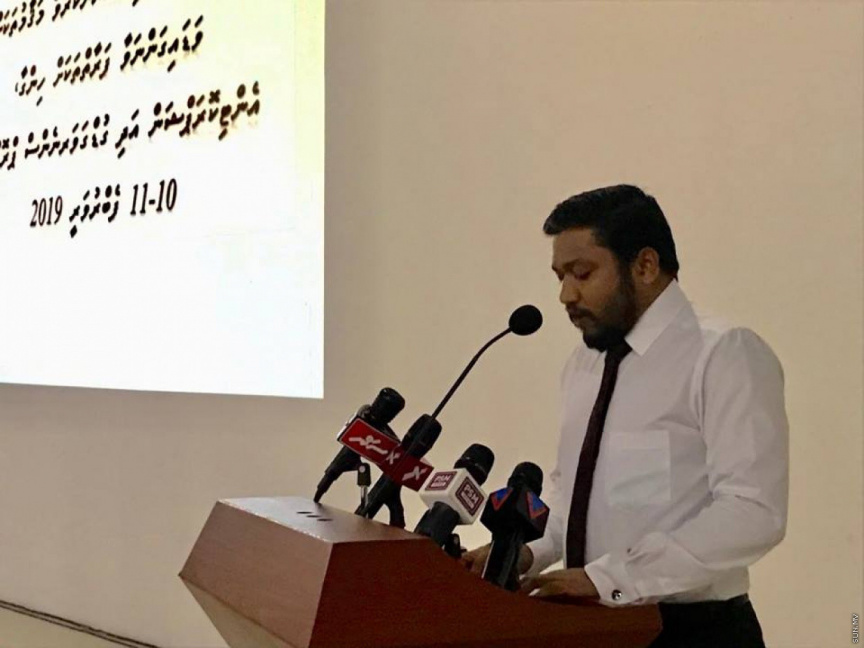 Chief of Staff at the President's Office, Ali Zahir speaks during the opening of the seminar on elimination of corruption and good governance at the National Art Gallery on February 10, 2019. (Sun Photo)

The hesitance of people with knowledge of corrupt practices to blow the whistle on such transgressions is one of the greatest challenges to eliminating corruption, says Chief of Staff at the President’s Office, Ali Zahir.

President’s Office, this Sunday morning, initiated a two-day seminar on elimination of corruption and good governance at government institutions – one of the goals in President Ibrahim Mohamed Solih’s administration’s 100-Day Agenda.

Opening the seminar at the National Art Gallery, Chief of Staff at the President’s Office, Ali Zahir expressed concern over the hesitance of people to reveal acts of corruption.

He announced the administration has submitted the Whistleblower Protection Bill to the Parliament designed to provide legal protection to the people who reveal information about acts of corruption.

“Maintaining legitimate rule, holding State institutions accountable and responsible, increasing the efficiency of the institutions to ensure they produce the necessary results is also an important principle of good governance,” said Ali Zahir.

The seminar is directed at both government ministries, offices and independent institutions.

Sessions at the seminar will be taken by relevant institutions and offices including the Attorney General’s Office, Anti-Corruption Commission, Transparency Maldives and International Republic Institute.

Maldivian economy could take a path of growth soon