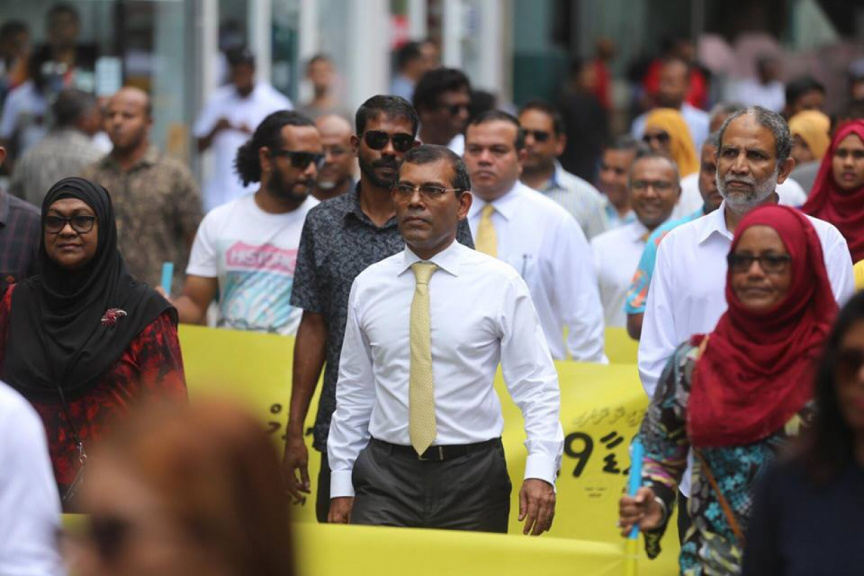 Former Maldivian President and Leader of MDP, Mohamed Nasheed walks together with other parliamentary candidates to submit applications to EC on February 6, 2019. (Sun Photo/Fayaz Moosa)

All 86 parliamentary candidates of Maldivian Democratic Party (MDP) have submitted their application forms for the Parliamentary Election 2019 to Elections Commission (EC).

The 86 candidates and members of MDP walked from EC headquarters in Sosun Magu to the EC election’s center at former Jamaluddin School compound to submit their applications in a show of solidarity and numbers this Wednesday morning.

The applications were accepted on behalf of EC by its Vice President Amjad Mustafa.

In a short statement following the submission of applications, Amjad said he expected MDP’s cooperation in ensuring the parliamentary election goes smoothly.

Member of EC, Ismail Habeeb Abdul Raheem said the election will be observed by representatives of candidates, political parties as well as local and international press.

“A vote cast in front of all these people should go without any fraud as long as we all fulfil our civic responsibility,” said Habeeb.

Former Maldivian President and Leader of MDP, Mohamed Nasheed, during his statement, expressed confidence EC will receive cooperation from MDP and all other political parties in the commission’s efforts to ensure a free and fair election.

Mariya: India could occupy Maldives if it wanted