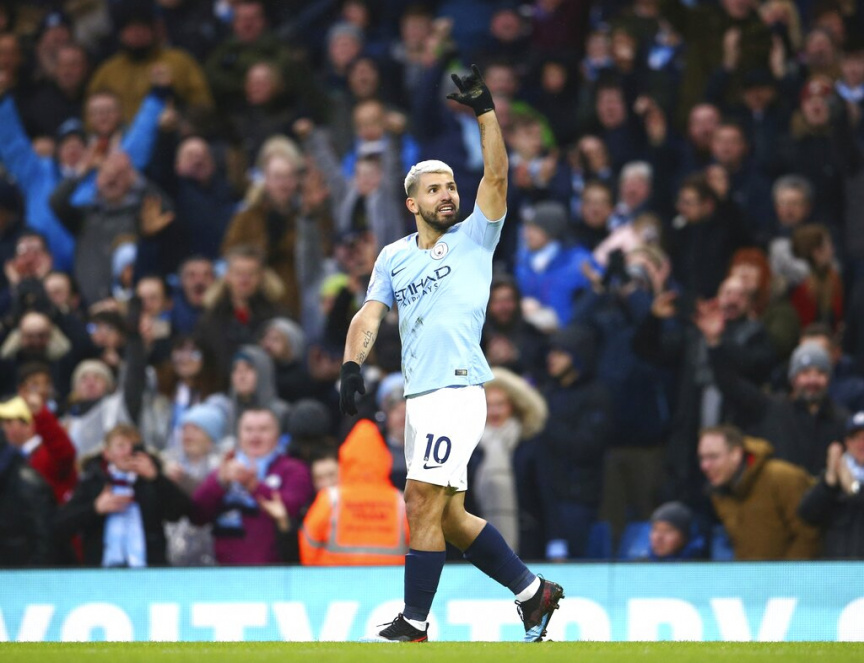 It involved three different methods of scoring against Arsenal: A header, a right-footed tap-in and, finally, a nudge with the left arm.

"I honestly thought it was my chest," Aguero said after City's 3-1 Premier League victory on Sunday. "But now I have seen it on the TV it was handball."

Good fortune, maybe. But Aguero was displaying the fortitude to get himself in the penalty area in the right place, at the right time. Just the attacking prowess and nous that Arsenal was lacking, with two strikers — Pierre-Emerick Aubameyang and Alexandre Lacazette — who could only muster one shot between them at the Etihad Stadium on Sunday.

It explains why City is back up to second place, two points behind Liverpool, which plays at West Ham on Monday night. And it also explains why Arsenal has dropped to sixth, allowing Manchester United to rise to fifth for the first time since the opening weekend of the season after beating Leicester 1-0 in Sunday's other game.

Having scored after 24 seconds in Tuesday's 2-1 loss at Newcastle, Aguero had to wait a little bit longer against Arsenal. But not that much — only 48 seconds — as he put City in front.

Arsenal conceded possession on the edge of the penalty area when Alex Iwobi was dispossessed. And with Aguero left unmarked and primed in front of goal, Aymeric Laporte whipped in a cross that the Argentine met with a downward header.

Just like at Newcastle, City threw away the lead. Lucas Torreira's corner was flicked on by Nacho Monreal and Laurent Koscielny sent a low, stopping header past goalkeeper Ederson in the 11th minute.

Unlike at St. James' Park, City was encountering a more timid opponent. The lead was restored in the 44th minute when Ilkay Gundogan chipped the ball to Raheem Sterling, who diverted it across the penalty area for Aguero to sweep over the line.

Sterling also created Aguero's third. Arsenal goalkeeper Bernd Leno got a touch to Sterling's cross from the left, but only to send the ball bouncing off Aguero's arm as he slid in for the connection.

With a 10th hat trick in the Premier League alone, Aguero is only one behind the retired Alan Shearer's record.

"In the first season, people said I didn't like him but always I was delighted," said Pep Guardiola, who took charge of City in 2016. "I am honest. Sometimes I played Gabriel (Jesus) or Raheem as striker.

"Today (Aguero) fought and did everything for the team. I judge the intention. The intention from Sergio was always perfect since we've been together."

Aguero has a special place in City history having scored the stoppage time goal that delivered the Abu Dhabi-owned team's first Premier League title in 2012. The goals on Sunday provide renewed hope that the defending champions can still try to overhaul Liverpool from top spot and win a fourth title in seven years.

"We wanted to get back on track," Aguero said, "playing good football."

Man United has been resurgent under Ole Gunnar Solskjaer but with no change in the standings — until now.

Thanks to Arsenal's loss, a seventh triumph in eight Premier League games under Solskjaer moved United above the London club into fifth place.

When Jose Mourinho was fired in December, United trailed fourth-placed Chelsea by 11 points. Now United is only two points behind Chelsea in the final Champions League place.

Solskjaer's hiring — for now until the end of the season on loan from Norwegian club Molde — has had an impact on Marcus Rashford and Paul Pogba. After struggling under Jose Mourinho they have scored 12 goals between them since the Portuguese coach's exit.

They combined for the only goal at Leicester. Rashford brought down a lofted pass from Pogba before striking into the bottom corner in the ninth minute of his 100th appearance for United.

"Our attitude was spot on," said Solskjaer, a six-time Premier League title winner at United as a player. "There are a couple of bruised noses and knees. It is supposed to be like this, there are three points on the line. Our lads sacrificed everything they had.

"They know they can do better than this but a clean sheet is always a foundation to build on."