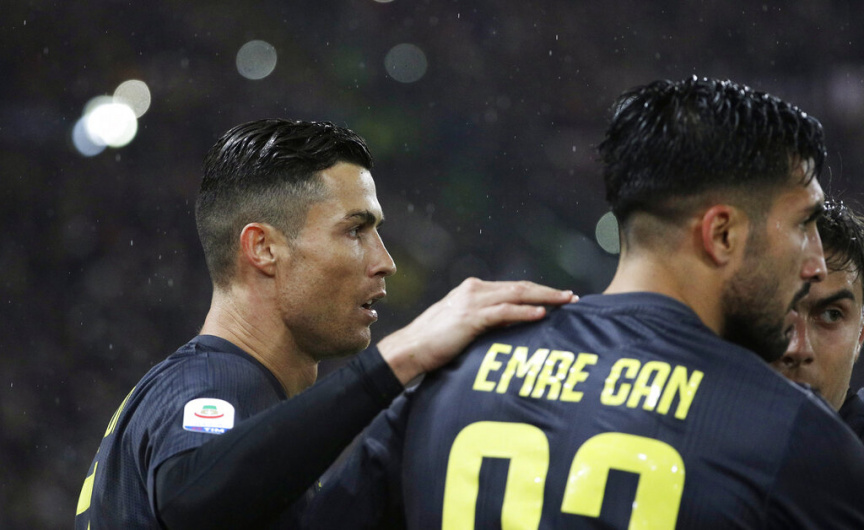 Juventus' Cristiano Ronaldo, left, celebrates with his teammates Emre Can, center, and Paulo Dybala after scoring his side's second goal during the Serie A soccer match between Lazio and Juventus at the Olympic stadium, in Rome, Sunday, Jan. 27, 2019. (AP Photo/Gregorio Borgia)

ROME (AP) — Cristiano Ronaldo bounced back from a difficult week by scoring a decisive penalty to help Juventus complete a 2-1 comeback win at Lazio on Sunday.

Juventus was overwhelmed for more than an hour at the Stadio Olimpico but two late goals enabled the Serie A leader to avoid its first loss of the season.

Ronaldo confidently struck his spot kick into the roof of the net three minutes from time — a week after he had a penalty saved during a win over Chievo Verona.

Also this week, Ronaldo pleaded guilty to tax fraud in Spain — adding to his off-field difficulties following an accusation of rape in a Las Vegas hotel in 2009. Ronaldo has denied any wrongdoing.

Lazio went ahead near the hour mark when Emre Can scored an own-goal.

But Joao Cancelo scored on Juventus' first chance less than 15 minutes later, turning in a rebound of a shot from Paulo Dybala following strong work from Federico Bernardeschi to provide a cross from the left flank.

Then Senad Lulic was whistled for a foul on Cancelo directly in front of the goal to set up Ronaldo's penalty.

Still, it was a difficult night for Juventus as defender Leonardo Bonucci hobbled off with an apparent injury in the first half.

Juventus didn't produce a single shot in the first half and defender Daniele Rugani had to clear a dangerous effort from Ciro Immobile off the line.

"For 50-60 minutes it was the worst Juventus of the season," Juventus defender Giorgio Chiellini said. "We always struggle against Lazio but we're leaving with a good result."

The victory moved Juventus 11 points clear of second-placed Napoli, which was held to a 0-0 draw at AC Milan on Saturday.

Roma wasted a three-goal lead and a chance to move into the Champions League places in a 3-3 draw at Atalanta.

Edin Dzeko had scored twice to end a long drought and Stephan El Shaarawy also found the target for Roma before Atalanta struck back with goals from Timothy Castagne, Rafael Toloi and Duvan Zapata.

A minute after Zapata had sent a penalty far above the bar, he scored the equalizer by finishing off a counterattack, extending his scoring streak to eight matches.

The 27-year-old Zapata, who is on loan from Sampdoria, has 15 goals this season, tied with Ronaldo, one behind league-leader Fabio Quagliarella of Sampdoria.

Roma is fifth, one point behind Milan.

Armando Izzo scored with a looping header before the break and Inter ended with 10 men when Matteo Politano was sent off for protests.

Inter remained third, eight points behind Napoli and five ahead of Milan.

Spal came back from two goals down for a 3-2 victory at Parma, with Mohamed Fares scoring the winner.