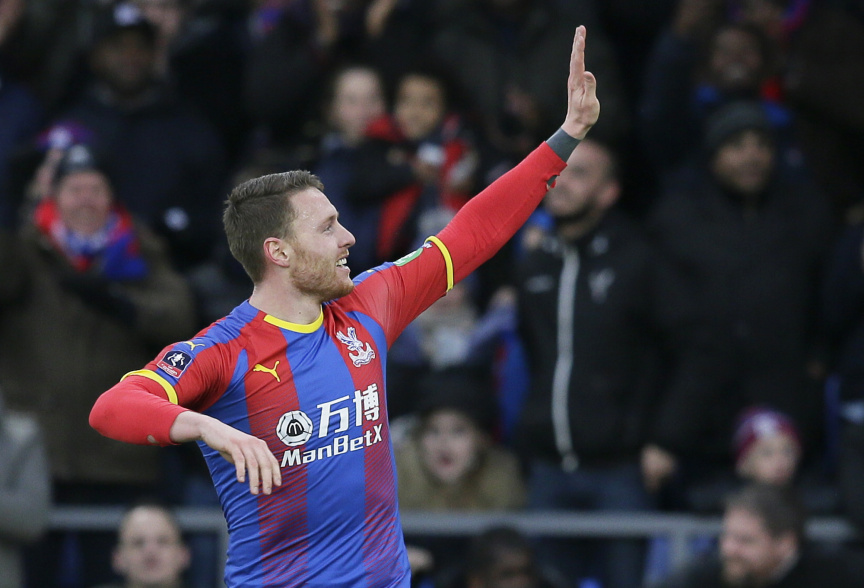 LONDON (AP) — Tottenham exited its second competition in four days after losing 2-0 at Crystal Palace in the fourth round of the FA Cup on Sunday, and defending champion Chelsea was boosted by two video reviews in beating Sheffield Wednesday 3-0.

Palace took a ninth-minute lead when Jeff Schlupp's shot was saved by Paulo Gazzaniga but the Spurs goalkeeper could only push the ball into the path of Connor Wickham and he scored with a routine tap-in for his first goal in 799 days. The former Sunderland striker has endured an injury-ravaged time over the last few seasons.

The hosts extended their advantage after Kyle Walker-Peters handled in the penalty area with Wickham lurking. Former Tottenham winger Andros Townsend slammed the resulting spot kick straight down the middle in the 34th.

Tottenham got a penalty of its own 10 minutes later when Patrick Van Aanholt brought down Juan Foyth, but Kieran Trippier fired well wide to ensure the Eagles took a 2-0 lead into the break.

Pochettino introduced Erik Lamela as a halftime substitute, but Spurs continued to struggle in front of goal in the absence of Christian Eriksen, who was not even on the bench, and the injured Dele Alli and Harry Kane.

Chelsea beat Tottenham in a penalty shootout on Thursday in the English League Cup semifinals after a 2-1 victory for Chelsea at Stamford Bridge left the two sides level 2-2 on aggregate.

The force — of VAR — was with Chelsea against struggling second-tier Sheffield Wednesday.

Chelsea conceded a first-half penalty, which the video assistant referee subsequently overturned, and quickly got a penalty of its own, which VAR confirmed.

Callum Hudson-Odoi scored on what could be his final Chelsea appearance and Willian netted twice at Stamford Bridge.

Hudson-Odoi started despite reportedly submitting a transfer request in an effort to force through a move to Bayern Munich ahead of Thursday's transfer deadline, and the 18-year-old winger netted Chelsea's second goal after 64 minutes.

Sheffield Wednesday had a penalty overturned by VAR after 22 minutes and Chelsea had a spot-kick awarded four minutes later, Willian converting from the spot, after referee Andre Marriner's decision had been confirmed by VAR.

"With VAR, it was obviously the correct decision but I thought we should have had a corner as a result (instead of a dropped ball) so that seemed a strange decision. But we're all a bit wiser now," Owls caretaker boss Steve Agnew said.

Chelsea celebrated its first goal in front of the Shed End, packed with visiting fans, some of whom took exception, with missiles thrown.

"I wasn't aware of that. It's not the right thing to do," said Agnew.

Willian added a late third as the Blues advanced to the fifth round.

Gonzalo Higuain made his first appearance as Chelsea made eight changes following its win over Tottenham.

Higuain made his debut after signing late on Wednesday on loan from Juventus.

Tottenham manager Mauricio Pochettino tried to look on the bright side after the defeat to Palace.

"Of course disappointed because, after Thursday and today again, out of two competitions. You feel disappointed. You can't feel anything different," Pochettino said.

"But now we have to be positive. We are still in two competitions, in a good position in the Premier League and the Champions League is a massive motivation for the whole club. We have to be strong."

Tottenham, which is third in the Premier League, hosts Borussia Dortmund in the first leg of the Champions League round of 16 on Feb. 13.

Reacting to the constant pressure for silverware, Pochettino said: "People wish we could win some trophies. But being realistic, we are doing so well. To win a title here in England like the FA Cup or Carabao (League) Cup is about being lucky, not only about quality in your squad."

Modric back to his best for revived Real Madrid