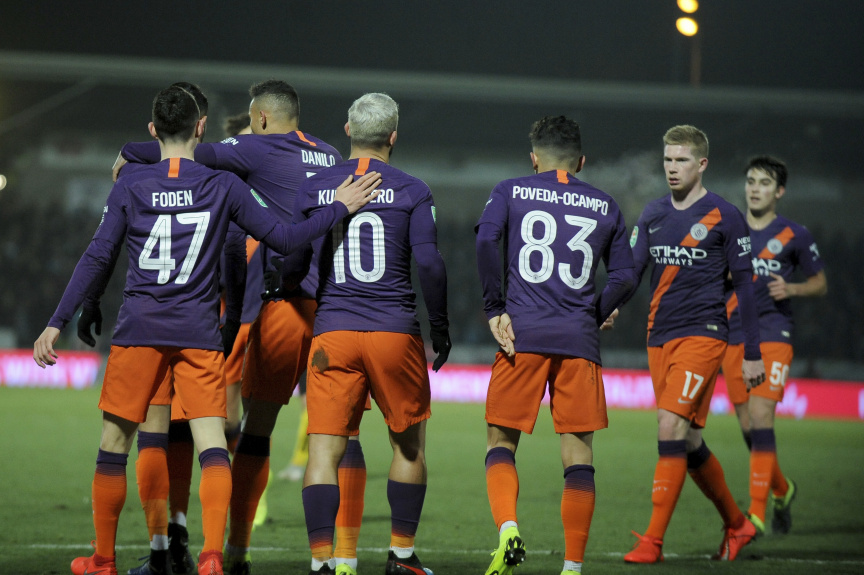 Pep Guardiola posed for selfies after getting off the team bus, and sat with his feet up in the dugout before kickoff.

It was not the most stressful of nights for the Manchester City manager.

City completed the formalities of its one-sided English League Cup semifinal against third-tier Burton Albion, winning the second leg 1-0 away on Wednesday for a 10-0 victory on aggregate.

Sergio Aguero, one of the few senior players fielded by City on a freezing night in central England, scored the only goal of the game in the 26th minute to lift the English champions to double figures across the two legs.

This game had been rendered virtually meaningless by the first leg at Etihad Stadium two weeks ago, when City racked up a 9-0 win to record the largest margin of victory in the semifinals of an English cup competition.

City's players didn't even celebrate at the final whistle at the Pirelli Stadium. Rarely can clinching a place in the final of a major cup competition have felt so underwhelming.

"We started at 9-0 up but I didn't see a lack of desire," Guardiola said. "We played seriously, had no injuries."

One noteworthy aspect of the second leg was the return to competitive action of City left back Benjamin Mendy, who has been out for 10 weeks with a knee injury. The France international came on as a substitute in the 63rd minute for Kevin De Bruyne, who was handed a start to improve his match sharpness after his own knee injury.

Guardiola said he played De Bruyne as a holding midfielder for this specific game to ensure the Belgium international got plenty of touches of the ball.

City is through to the Feb. 24 final at Wembley Stadium and is looking to retain a title it has won on five occasions — three times since 2014.

Tottenham leads Chelsea 1-0 heading into the second leg of their semifinal on Thursday.

As for Burton, it brings to an end a remarkable cup run that saw the side beat four teams from leagues above them in English soccer's pyramid. One of them was Premier League team Burnley.

"We got our pride back," said Nigel Clough, the former England forward who is coach of Burton. "We did everything we could. Being at home, the pressure was off as the tie was over but we put in a good performance against top players.

"The youngsters will learn so much from being on the same pitch as these magnificent players. Their attitude, everything. Hopefully we have made a few quid from the run but it's more about the experience."