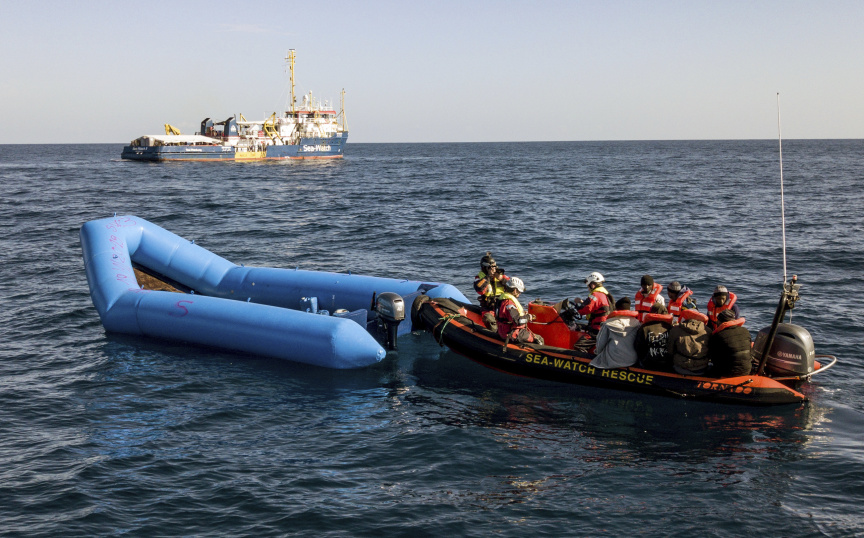 In this photo taken on Saturday, Jan. 19, 2019, a Sea-Watch ship approaches a dinghy boat to rescue migrants in the Mediterranean Sea. (Jon Stone/Sea-Watch via AP)

With Italy's government on the defensive over recent deaths at sea of migrants, Italian Deputy Premier Luigi Di Maio sought to shift the blame onto France. Speaking Sunday, Di Maio said France is leading colonial-style policies in Africa that are "impoverishing" Africans and driving them to Europe's shores.

A French diplomatic official said Italian Ambassador Teresa Castaldo was questioned Monday about the "unfriendly and baseless" comments. The official said they run counter to "Franco-Italian partnership" and the sense of "European community." The diplomat wasn't authorized to be publicly named.

Di Maio downplayed the tensions on Monday, telling journalists "I don't think it's a diplomatic case." But he insisted that "it's true, France is one of those countries" whose actions in Africa contribute to migrants leaving their homelands on dangerous journeys.

Separately, the German government said that in a first, more asylum-seekers were transferred to other European Union countries than Germany took in last year.

Interior Ministry spokesman Steve Alter said Germany relocated 9,209 people in 2018 under the EU regulation that requires asylum applications to be handled in the first country a person seeking protection reached in Europe.

Germany took in 7,580 people from other EU countries under the same rule last year.

The sending-receiving was disproportionately reversed in 2016, when Germany assigned 3,968 asylum-seekers elsewhere in the EU, but accepted 12,091 from other countries.

More than 1 million migrants have applied for asylum in Germany since 2015, but the country has toughened its asylum laws and tried to deport more people than it did previously.