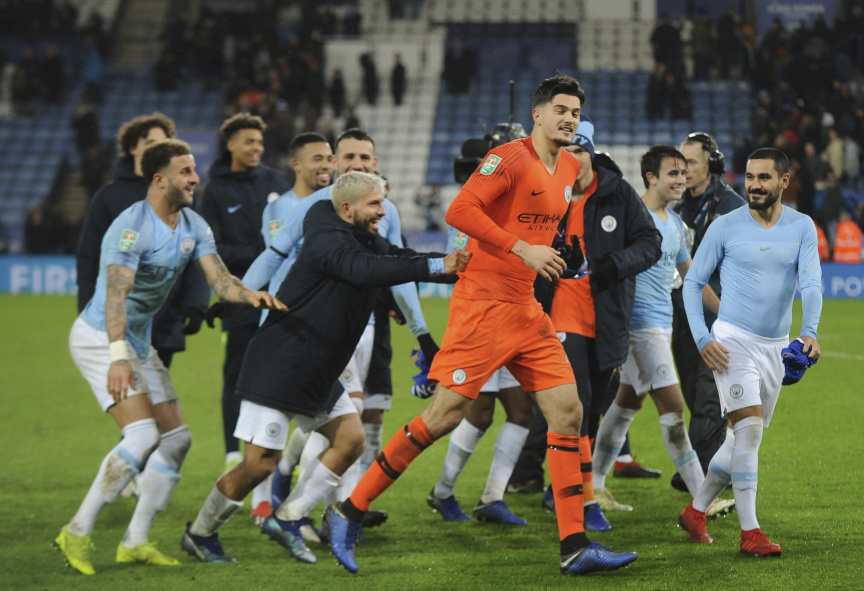 Manchester City's goalkeeper Arijanet Muric, centre celebrates in font of their fans teammates after they won the English League Cup quarterfinal soccer match at the King Power stadium in Leicester, England, Tuesday, Dec.18, 2018. Manchester City won 3-1 in a penalty shoot out after the match ended in a 1-1 draw in normal time. (AP Photo/Rui Vieira)

On a tumultuous day for beleaguered Manchester United, crosstown rival Manchester City advanced to the English League Cup semifinals to keep in the hunt for trophies on four fronts this season.

Man City beat Leicester 3-1 in a penalty shootout on Tuesday to stay on course to retain the title and give Pep Guardiola another piece of silverware, hours after his great managerial rival Jose Mourinho was fired by United.

The game finished 1-1 in regulation time, with Kevin De Bruyne marking the first start of his latest comeback from injury with the opening goal from the edge of the area for Man City before Marc Albrighton equalized.

City was surprisingly joined in the semifinals by third-tier Burton Albion, which won 1-0 at second-tier Middlesbrough to keep its fairytale run going in the competition.

Burton became the first team from the third tier or lower to reach the last four of the League Cup since Sheffield United did so under manager Nigel Clough in 2014-15. Clough now coaches Burton.

In a low-quality shootout at the King Power stadium, only four of the eight penalties taken were scored. The decisive one was the best of the lot, converted high into the corner by Man City left back Oleksandr Zinchenko.

It spared some of the embarrassment of his teammate Raheem Sterling, who attempted a so-called "panenka" down the middle and only succeeded in chipping it over the bar.

Leicester failed to score from three of its four attempts, with Man City back-up goalkeeper Arijanet Muric saving two of them.

"He's got veins of ice," De Bruyne said of the 20-year-old Kosovan goalkeeper, who was making only his third appearance for the Premier League champions.

Leicester manager Claude Puel made seven changes to his team, despite the League Cup being his best chance to win silverware this season.

Guardiola won two trophies last season — the League Cup and the Premier League — and has the strength in depth in his squad to seriously challenge for every title possible this season, too.

City has qualified for the last 16 of the Champions League, where it was given a favorable draw against Schalke, and is second in the Premier League — a point behind Liverpool.

Guardiola offered his condolences to Mourinho, who arrived in Manchester in the same summer of 2016, but hasn't enjoyed the same success as Guardiola.

"I am always sad for the manager when that happens," Guardiola said. "We are alone in that situation. I am close to all of the managers. You are sacked when results are not good.

"He doesn't need me, he is so strong. I wish him all the best and he will be back soon."

Penalties for Chelsea, smoother for Arsenal in cup

Man U knocked out of League Cup; Chelsea wins