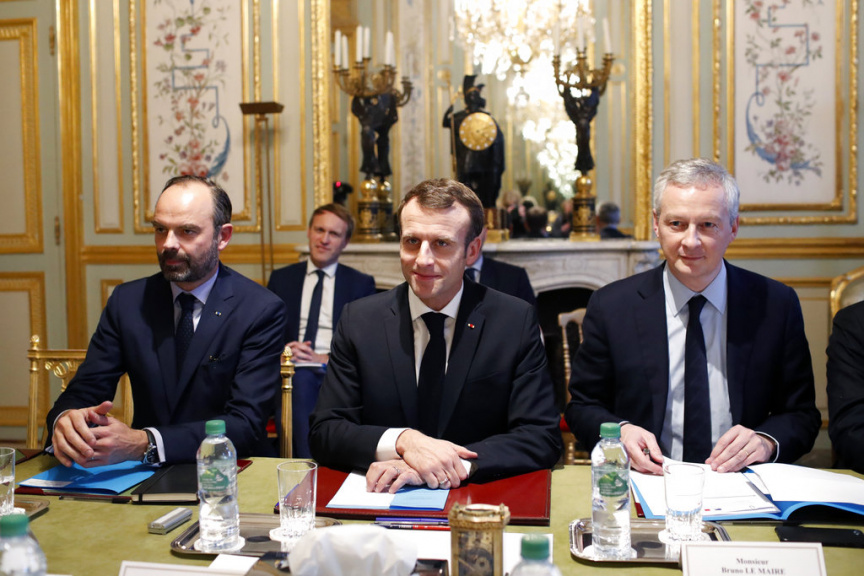 France's President Emmanuel Macron, center, France's Prime Minister Edouard Philippe, left, and France's Finance Minister Bruno Le Maire, right, attend a meeting with the representatives of the banking sector at the Elysee Palace, in Paris, Tuesday, Dec.11, 2018. Macron met with representatives of the banking sector to discuss responses to bring to the Yellow Vest protesters' claims. The meeting comes one day after he speed up tax relief and to boost the purchasing power of struggling workers and retirees in a national television address. (AP Photo/Thibault Camus, Pool)

PARIS (AP) — French President Emmanuel Macron is trying to take back control of his nation after a month of devastating protests — and now a new attack that's putting the country on renewed terror alert.

Striving to show he's responding to "yellow vest" protesters' demands for tax relief, the French leader maintained his planned agenda Wednesday. He held his weekly Cabinet meeting and talks with big public and private companies, notably to encourage them to give a tax-free year-end bonus to their employees.

At the same time, Macron's office said he was staying informed into the investigation into the Strasbourg attack and hunt for the gunman, still on the run.

Macron said "the terrorist threat is still at the core of our nation's life," in comments reported by government spokesman Benjamin Griveaux.

Macron is the latest world leader to catch COVID-19

Macron urges US to reject isolationism