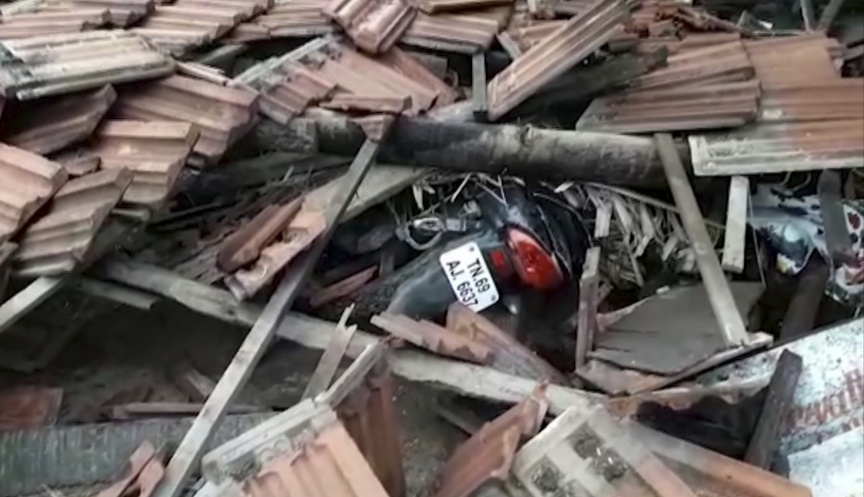 In this grab made from video provided by KK Productions, a motorcycle is covered in debris from a house that collapsed when a cyclone struck Nagapattinam, in the southern Indian state of Tamil Nadu, Friday, Nov. 16, 2018. (KK Production via AP)

NEW DELHI (AP) — A cyclone hit the coast of southern India on Friday, killing at least 13 people, damaging homes and forcing the evacuation of more than 80,000 residents.

People living in low-lying areas had been taken to more than 470 relief centers in six districts, and fishermen were warned to stay away from the sea.

The storm felled trees and power lines, and authorities preventively disconnected the electricity supply to the worst-hit areas to prevent electrocutions. Schools were closed in places, and vehicles remained off the roads in most parts of Nagapattinam and Karaikal districts, the Press Trust of India news agency said.

Nagapattinam district bore the brunt of the cyclone with a rainfall of 15 centimetres (6 inches), the local weather office said.

The cyclone destroyed or partially damaged nearly 1,600 mud huts and uprooted more than 5,000 trees in the area, state authorities said.

Tamil Nadu state is prone to cyclones that develop in the Bay of Bengal. In 1999, a cyclone killed more than 15,000 people in eastern Orissa.

India has another record jump of cases