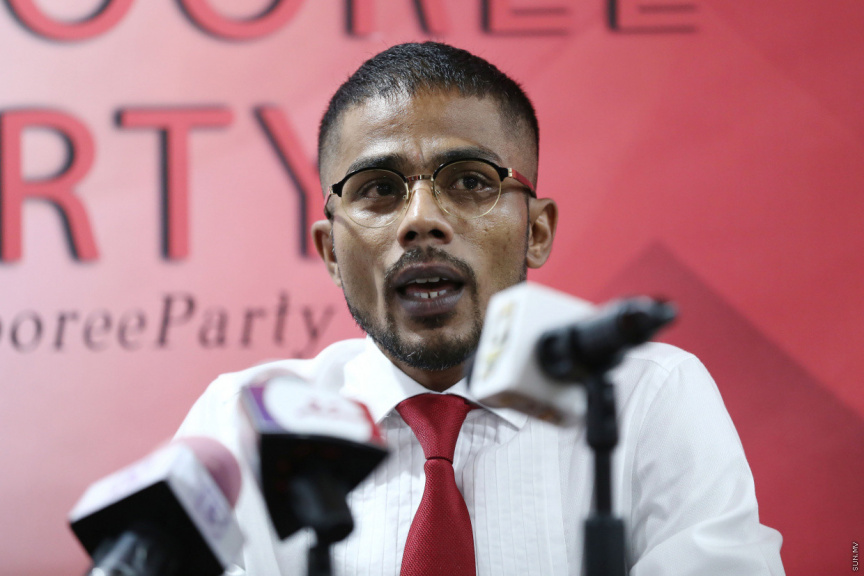 Alhan Fahmy alleges the assault on him on February 1, 2014 was financed by former Vice President Ahmed Adeeb Abdul Gafoor.

Answering a question by ‘Sun’ during the press conference held after the signing, Alhan said his personal investigation into the assault uncovered evidence the assault was financed by Adeeb – who had been serving as Minister of Tourism at the time.

Alhan was at the restaurant, Breakwater, located in Male’ City, on February 1, 2014 when he was stabbed with a knife.

“The police, during their investigation, failed to make sufficient inquiry into my claim. My personal investigation proved to be beyond a shadow of doubt that the assault was carried out by people hired by former Vice President Ahmed Adeeb,” said Alhan.

Alhan said he feared the evidence may be lost, and therefore unofficially alerted Commissioner of Police Hamdhoon Rasheed. He said he will file an official request with the Maldives Police Service after President-elect Ibrahim Mohamed Solih (Ibu)’s inauguration on November 17.

He said he didn’t previously press for investigation into the claim not due to lack of evidence, but due to is lack of trust in President Abdulla Yameen Abdul Gayoom’s administration.

He expressed confidence the case will be re-examined during President-elect Solih’s administration, and that he will get justice.

Siraj said Adeeb was ready to answer all questions by investigators once Solih assumes office. He said Adeeb will therefore provide his full cooperation into an investigation over Alhan’s allegation.

Siraj also said the veracity of Alhan’s allegation can only be determined through a free and unbiased investigation.

Though the MPS’s investigation into the assault on Alhan initially pointed to the involvement of multiple suspects, the Prosecutor General’s Office filed charges against only one suspect. The court has yet to issue a judgement in the case.