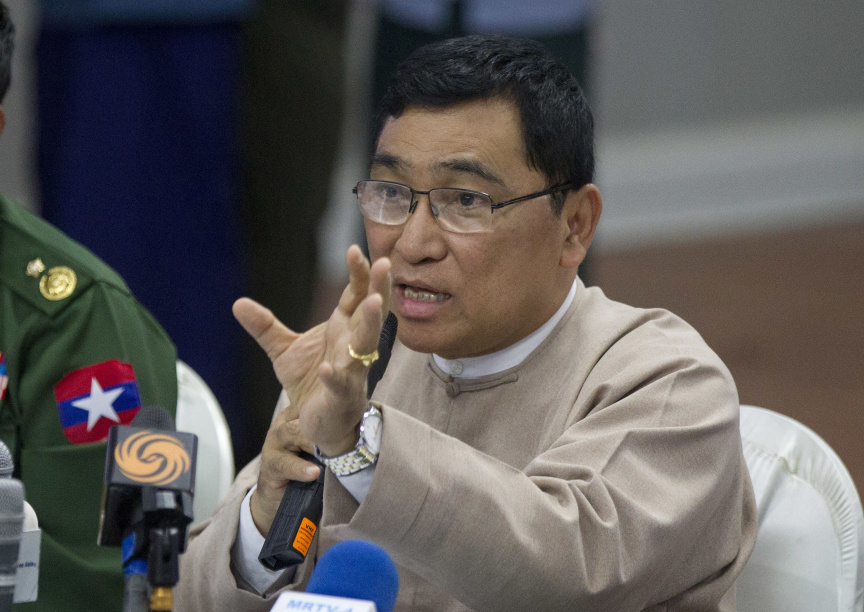 YANGON, Myanmar (AP) — The repatriation of ethnic Rohingya Muslims from Bangladesh, to which more than 700,000 fled since last year to escape deadly violence carried out by Myanmar's security forces, will begin this week, top Myanmar officials said Sunday.

Minister of Social Welfare, Relief and Resettlement Win Myat Aye announced at a news conference that Bangladesh had informed Myanmar authorities that repatriation, agreed upon in principle months ago, would begin on Thursday. A Myanmar government statement said an initial group of 2,251 would be sent back from mid-November at a rate of 150 per day.

Noting that the actual date depended upon Bangladesh taking action, Win Myat Aye said, "Whether it will happen on the day or not, we have to be ready on our side and we try our best to do that."

Abul Kalam, Bangladesh's repatriation commissioner, said he was unaware that a date had been set. "I have got no decision from our foreign ministry or any other higher authorities," he said.

The Rohingya exodus began after Myanmar security forces launched a brutal crackdown following coordinated insurgent attacks in August 2017. The scale, organization and ferocity of the operation led to accusations from the international community, including the United Nations, of ethnic cleansing and genocide. Myanmar's government has denied this.

Human rights advocates say conditions are not yet safe for the return of the Rohingya refugees, who have generally been denied citizenship and civil rights in Buddhist-majority Myanmar, where prejudice against them runs high.

The U.N.'s independent investigator on human rights in Myanmar, Yanghee Lee, last week urged a halt to "rushed plans" for the repatriation, saying a lack of guarantees that the refugees wouldn't face new persecution if they returned home was concerning.

According to Sunday's Myanmar government statement, the returning Rohingya would stay at repatriation camps for two days and receive food and clothing before moving on to transit camps. It said China, India and Japan were "providing necessary assistance" for the repatriation process, but did not give details.

It isn't clear how long the returnees would have to stay in the transit camps or where they would go afterward, as many Rohingya villages have been erased by bulldozers, with the land given to local Rakhine Buddhists.

Officials said Sunday that returnees can get an ID document called a National Verification Card that will allow them to travel anywhere in the Maungdaw area of Rakhine State. They can then begin to apply for citizenship.

But there is widespread skepticism that any returning refugees will ever be granted citizenship.

The overwhelming majority of people in Myanmar do not accept that the Rohingya are a native ethnic group, instead seeing them as illegal migrants from Bangladesh and calling them "Bengalis."

In remarks delivered last month at the United Nations, Yanghee Lee said the Rohingya "should not go back to ... the oppressive laws, the discrimination. The minimum they need is freedom of movement, access to basic health services."

"Right now, it's like an apartheid situation where Rohingyas still living in Myanmar ... have no freedom of movement," Lee said. "The camps, the shelters, the model villages that are being built, it's more of a cementing of total segregation or separation from the Rakhine ethnic community."