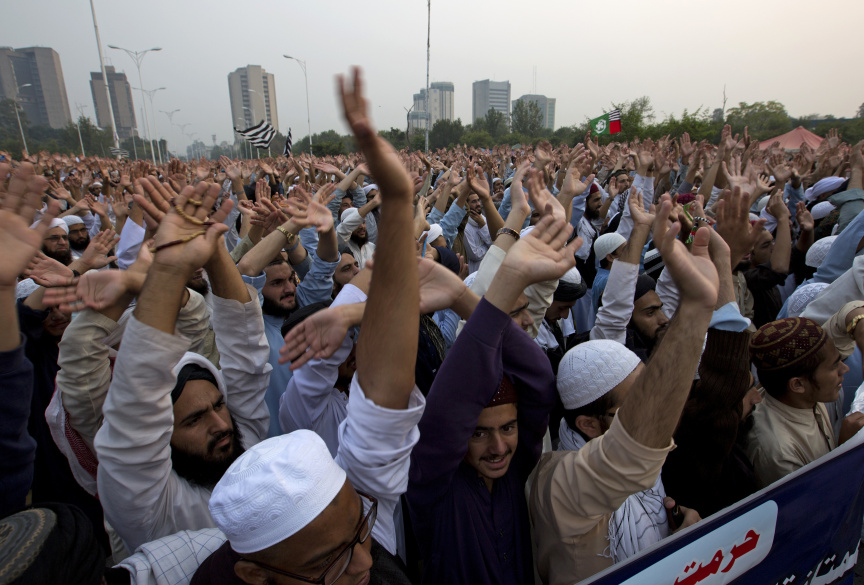 ISLAMABAD (AP) — A Christian woman who spent eight years on death row under Pakistan's blasphemy law was acquitted and ordered released Wednesday by the country's top court, a ruling that raised fears of violence by religious extremists who held angry protests over the verdict.

Asia Bibi was in an undisclosed location for her safety, and her lawyer said he expected that she would soon leave the country. France and Spain have offered asylum to the 54-year-old mother of five, who is a Roman Catholic.

Chief Justice Mian Saqib Nisar, who had received death threats, announced the landmark verdict that fully overturned her 2010 conviction to a packed courtroom amid increased security.

Thousands of supporters of the Tehreek-e-Labbaik party, led by firebrand cleric Khadim Hussain Rizvi, took to the streets in protests, demanding Bibi's public execution. Rizvi has turned out tens of thousands of supporters before, often forcing authorities to bow to his demands on religious matters.

Hundreds of Islamists blocked a road linking the city of Rawalpindi with the capital, Islamabad, and protests were held in Karachi, Peshawar and other cities. In the eastern city of Multan, police arrested several demonstrators after clashes.

Security forces moved quickly, deploying outside churches to protect minority Christians and urging demonstrators elsewhere to disperse peacefully. Commandos were sent to protect Nisar and the other two judges of the Supreme Court after a cleric in the eastern city of Lahore urged religious extremists to kill them.

The outburst over the divisive blasphemy law prompted Prime Minister Imran Khan to go on national TV to guarantee their safety and criticize those who made verbal attacks on Pakistan's institutions, including his government.

"They are not serving Islam, but trying to increase their vote bank," Khan said of the clerics. "They are doing their politics."

The verdict was seen as a hopeful sign by Christians in Pakistan, where the mere rumor of blasphemy can spark lynchings. Religious minorities, who have been repeatedly targeted by extremists, fear the law because it is often used to settle scores and to pressure minorities.

Religious extremists have made defending the law a central rallying cry and have attacked those who question it.

Salman Taseer, the governor of Punjab province, was shot and killed by one of his guards in 2011 for defending Bibi and criticizing the misuse of the law. The assassin, Mumtaz Qadri, was hanged for the crime, but later was hailed by religious hard-liners as a martyr, with millions visiting a shrine set up for him near Islamabad. Shahbaz Bhatti, Pakistan's minister for minorities, was killed later that year after demanding justice for Bibi.

Bibi, who has been held in solitary confinement on death row since 2010, was accused of blasphemy after she quarreled with two fellow female farm workers, who refused to drink from a container used by a Christian. A few days later, a mob accused her of insulting Islam's Prophet Muhammad, leading to her initial conviction.

Bibi's family and her lawyer, Saiful Malook, say she never insulted the prophet. In previous hearings, Malook pointed to contradictions in testimony from witnesses. The two Muslim women who pressed charges against Bibi denied they quarreled with her, saying her outbursts against Islam were unprovoked despite several other witnesses who recalled the dispute.

Chaudhry Ghulam Mustafa, a lawyer for one of the plaintiffs, rejected the verdict, saying Bibi had confessed to making derogatory remarks against the prophet to seek a pardon.

The three judges upheld the blasphemy law itself, saying it was consistent with verses from Islam's holy book, the Quran.

But they said prosecutors had failed to prove that Bibi violated the law. In addition to citing the Quran, the judges also referenced Shakespeare's "King Lear," saying Bibi was "more sinned against than sinning."

The verdict suggested that officials could be open to demands from rights groups for stricter punishments for false accusations.

"If our religion of Islam comes down heavily upon commission of blasphemy, then Islam is also very tough against those who level false allegations of a crime," they wrote.

"My wife spent so many years in jail and we hope that we will soon be together in a peaceful place," he said.

Pakistan has about 2.5 million Christians. Along with Shiites, Ahmadis and other minorities, they have been targeted by religious extremists.

Malook said Bibi would be secreted out of the country quickly, adding that he is contemplating the same move.

"I am afraid I will have to leave Pakistan. That is the only way to save my life," Malook said in a telephone interview with The Associated Press.

"The situation, I am worried, will go very bad for me. I am the most soft target for all these people," he said, referring to religious extremists who he said have threatened his life.

Michael Kugelman, deputy director of the Asia Program at the U.S.-based Wilson Center, called the ruling a "major legal milestone for Pakistan."

"The increasing political clout of religious hard-liners, who boast the ability to mobilize in a big way, suggests that the state will be under more pressure than ever before," he said. "The sobering reality is that it's not going to get any easier to push for reform, much less repeal, of the blasphemy law, despite this landmark and very brave decision by the Pakistani Supreme Court."

The decision also was praised by the Christian minority and human rights activists.

"I salute to the honorable judges who refused to be cowed down and lit a candle in darkness and raised hopes in hopelessness," said Farhatullah Babar of Pakistan's People's Party of Benazir Bhutto. The former prime minister was killed by extremists in 2007 after she threatened to target them if she returned to power.

Babar had advocated for changes to the law, making it a serious offense to wrongly accuse someone of blasphemy.

The U.S. Commission on International Religious Freedom, a government body, said Bibi's case "illustrates the extent to which blasphemy laws can be exploited to target minority communities."