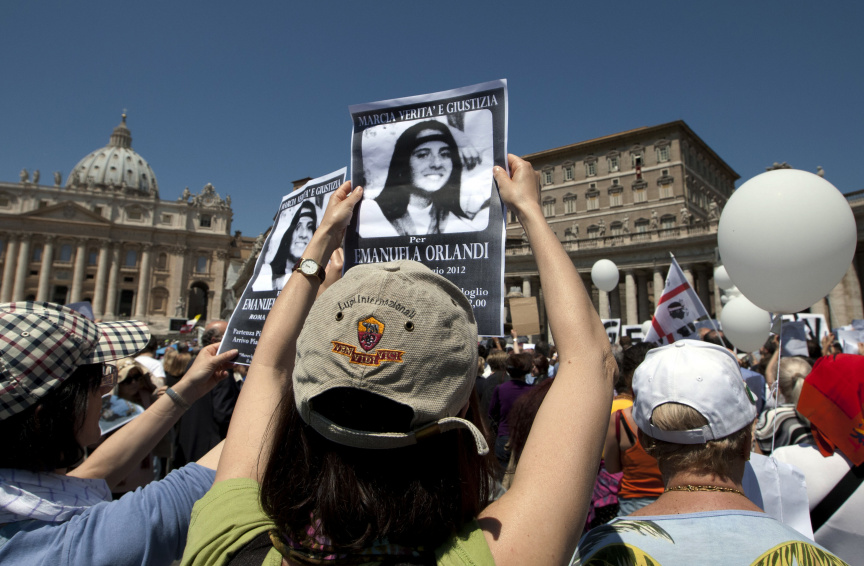 VATICAN CITY (AP) — The Vatican said Tuesday that human bones were found during renovation work near its embassy to Italy, reviving talk about one of the Holy See's most enduring mysteries — the fate of the 15-year-old daughter of a Vatican employee who disappeared in 1983.

In the latest twist in a case that has bedeviled investigators for 35 years, the Vatican said Rome's chief prosecutor had been called in and forensic investigators are working to determine the age and gender of the bones as well as the date of death.

The Vatican statement didn't mention the girl, Emanuela Orlandi, but Italian media immediately linked her unsolved disappearance to the discovery of the bones. The Vatican said merely that the bones were found during work near its Rome embassy in the upscale residential neighborhood of Parioli.

Orlandi disappeared after leaving her family's Vatican City apartment to go to a music lesson in Rome. Her father was a lay employee of the Holy See.

Over the years, her case has been linked to everything from the plot to kill St. John Paul II to the financial scandal of the Vatican bank and Rome's criminal underworld.

The last major twist in the case came in 2012, when forensic police exhumed the body of a reputed mobster from the crypt of a Roman basilica in hopes of finding Orlandi's remains as well. The search turned up no link.

More recently, a leading Italian investigative journalist caused a sensation when he published a five-page document last year that had been stolen from a locked Vatican cabinet that suggested the Holy See had been involved in Orlandi's disappearance. The Vatican immediately branded the document a fake, though it never explained what it was doing in the Vatican cabinet.

The document was purportedly written by a cardinal and listed supposed expenses used for Orlandi's upkeep after she disappeared.

Italy’s ‘Patient No. 1’ joins race as sign of hope